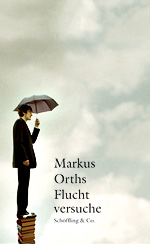 »FLUCHTVERSUCHE has a taste of Kafka and Borges, but also reminds one of Roald Dahl's adult shorts.«
New Books in German

An oblique look at life: a rich world-famous beauty invites a complete stranger to her villa in Andalusia. However, the visit develops quite differently from what the young man had in mind; a writer is being blackmailed by his new neighbour and so has to listen to his »ingenious idea« for a story; someone realises with horror that everything has actually been said already and invents a machine that blanks out conversation; and, in a tale of virtuoso satirical excess, a man has to organise his own wife’s funeral.

Markus Orths writes of insane attempts to escape, of breakups and breakdowns. He looks at our lives, the lives that we all too often postpone until some distant time in the future. Or he considers those chances to finally take the bull by the horns, even if we can never know how things will turn out. A book like a party bag: bizarre, cryptic, touching, and humorous – Markus Orths masterly portrays every emotion.

Gripping stories with unexpected twists and turns that develop like film scripts from the author of the bestseller LEHRERZIMMER and CATALINA, currently being translated into five languages.


»If stories were animals, then Markus Orths’ tales would be octopuses: their tentacles wrap themselves around the reader and they don’t let go.«
Stuttgarter Zeitung

»Markus Orths masters the full spectrum of literary form. (...) Comically grotesque, subtly perceptive, or factually reporting, Markus Orths is a narrator of impressive style, a language artist. A lot more is to be expected from this fine writer.«
Lower Rhine Literature Award, the Jury

US – Words Without Borders (first serial)

»Against the airy current of the Generation Pop, Markus Orths sets his brilliant ideas and down-to-earth originality. (...) He is a master of those irrevocable elements of life, of the existential and the lapidary.«
DIE ZEIT

»Here’ s one author who wants to tell something and has something to tell, too.«
Süddeutsche Zeitung

»Markus Orths’ FLUCHTVERSUCHE leave you with a delightful shudder - think Kafka, think Hitchcock. Playful, funny, intelligent, and insightful, these outstanding stories just have it all.«
Deutschlandfunk

»If literature aims at transcending the ordinary, Markus Orths is its true master. (...) As stringent as Kafka, but with incomparable ease, Orths’ stories turn reality upside down.«
Badische Zeitung

»Like a great magician, Orths waves his wand to conjure up the most brilliant punchlines, as if it was nothing.«
Main-Echo