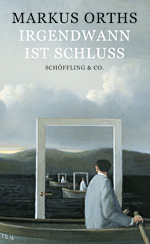 Life is a wild battle, and language its most important weapon. With brilliance, wit and passion, Markus Orths tells stories of people fighting against ancient fears and concrete existential threats; people wrestling over love and recognition, over security, dignity and self-determination.
A man flees supposed enemies into the palace of his childhood, and thus becomes a prisoner of himself. A slightly unfamiliar kind of outraged citizen attacks the Federal Republic of Germany. The head of a company is lured into a trap and confronted by his victims.

In his new stories Markus Orths plays deftly and diversely with genres and situations that can tip into the grotesque at any time – as if life were the arrangement of balls on a snooker table. Roles are blithely swapped, expectations dashed and all kinds of dangers sidestepped. And again and again someone shrieks or whispers: »Enough’s enough.«

»In the most impressive story of this volume, titled SHOT TO NOTHING, Orths describes the supreme discipline of snooker – as a whole mode of being.«
Frankfurter Allgemeine Zeitung

»Markus Orths`new volume IRGENDWANN IST SCHLUSS ranges from delusion to cabaret. The author of six novels and three volumes of stories proves himself as an adept follower of Kafka, Dürrenmatt or Thomas Bernhard. Though his stories are often set in the realm of delusion, Orths`narrative style is characterized by an austere sobriety, which evokes a striking mixture of grotesque comedy and subtle humour.«
Süddeutsche Zeitung

»Markus Orth’s stories are full of life, full of absurdity, crystal clear and yet uncanny.«
Deutschlandfunk

»Markus Orths, master of the short form, creates protagonists who fall victim to their own delusions. In a subtle, concise manner and with an humorous undertone, Orths shows how they obsess about love or personal safety, proving himself as a brilliant observer of human paranoia.«
Deutschlandradio

»Each of Markus Orths’ protagonists faces something unexpected, and their reactions seem quite plausible. (...) Smitten with Orths` straight style of narration, the reader finds himself becoming an accomplice of some quirky and weird actions. (...) What we call reality actually is the result of our perception. (...) Orths skilfully manages to fuse amusement and ambition, lightness and deepness.«
Frankfurter Neue Presse

»›The idea of love sounds like old rags.‹ A rough under-tone dominates Markus Orth`s stories, which are linked up by the title IRGENDWANN IST SCHLUSS. Funnily enough: Those, who utter these words to end a situation suddenly find themselves facing something new.«
Westdeutsche Allgemeine Zeitung

»The author Markus Orths admits that he loves to play with literary genres. With the extraordinary volume IRGENDWANN IST SCHLUSS he presents a rare and thrilling mix of cynicism, irony and satire. Is it all real or just a dream? – one of the questions which remain unanswered.«
Saarbrücker Zeitung

»A man sells his life. In return, he is allowed to live in luxury for fourteen months: all his wishes are fulfilled. But afterwards he will have to face his murderer. This seems to be a good deal, weren’t it for a particular game of snooker (...) Would you give away your life in exchange for fourteen months in paradise? (...) It`s all about the question how far one is willing to go and the fact that, at some point, all things must come to an end.«
Fixpoetry.de

»Orths writes clear, sober prose. He does not simply replicate reality and even when he does, he does so in a highly entertaining fashion.
His stories capture the essence of both the absurdity and the magic of everyday life.«
Stuttgarter Zeitung

»The short stories present more intensely what in Orths’ novels is embedded in a broader context. On the one hand, it can sometimes be irritating that the intention of the text is so obvious; on the other hand this very feature is the strength of the book. The themes are profound and deeply human: revenge, morals, death, the meaning of life, luck, and insanity. Again and again, Orths unmasks everyday life as being illusory.«
Augsburger Allgemeine