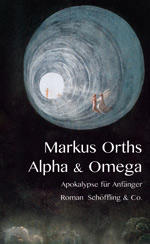 Suddenly it appears: a black hole in Nevada. A monstrosity, created by physicists, it is devouring the earth piece by piece.

What now? Maybe Omega Zacharias can help. After all, she's the first person to have three brain hemispheres, and possesses spectacular telekinetic powers. Along for the ride on her rescue misson are her brother Alpha and a band of unlikely heroes: the richest man in the world, a flying magician and game inventor, a gay Buddha, a football-loving garbageman and his esoterically learned wife, a sex-obsessed particle physicist and a daring performance artist.

Omega's story is narrated and recorded by Elias Zimmermann, who has travelled back from the year 2525 to the present day. He accompanies Omega and her friends on their crazy journey, taking a look at the absurd excesses of our contemporary world.

In his tenth book Markus Orths pulls out all the stops to give a virtuoso demonstration of his skill. Alpha & Omega is a superb parody of a ›saviour story‹ and of science, brimming with increasingly dizzying escapades.

»A breathtaking narrative experiment. … ALPHA & OMEGA itself works like a black hole absorbing the set pieces of our culture only to spit them out in a place where they all make sense again. Absolutely worth the trip!«
Neue Zürcher Zeitung

»ALPHA & OMEGA is a great novel! Even more than that: It is fantastic! The entire time, the reader is uplifted by the marvellous story and linguistic style (he literally floats through the pages, thanks to Omega). A breath of fresh air. Incredibly entertaining and inventive!«
Simone Finkenwirt, Manager Hugendubel Berlin

»ALPHA & OMEGA is full of explosives and black holes and puns and strange characters and weird twists and above all linguistic-special effects. There is a bomb attack, time travel and a plane crash – however the thing that is most exhilarating is the way he tells the story. Sometimes excessively full of vicious wordplay, sometimes onomatopoeticly, sometimes hilariously and then again boldly concise: In any case, always different than you would expect.«
SPIEGEL ONLINE

»ALPHA & OMEGA is a thrilling, intelligently written brick of a novel. Almost in the same range as The Matrix, definitely just as entertaining!«
Der Freitag

»Apocalypse for beginners – Markus Orths has blended narrative art with grotesque elements and social-critic imagination into a refreshing cocktail, adding a drop of quantum physics and a splash of deliciously sharp suspense. An imaginative reading experience.«
Westdeutscher Rundfunk (WDR5)

»You have to read this for yourself, because no critic can transmit the intelligent couldn’t-care-less attitude, punning wit and absolute acid morality ALPHA & OMEGA is pervaded with. (…) There he is at last: a German author whose humor is capable of challenging the Anglo-Saxon. Markus Orths has written a hilarious novel you just have to read.«
hr-online

»One of the most imaginative books of recent years. For Markus Orths, ten pages suffice to outdo the pool of ideas of a normal novel.«
Klappe auf

»Orths convincens with refined style, linguistic virtuosity and a suspense-packed story. Once you’re drawn into this unsusual novel there is no escape.«
phantastisch!

»A sardonically written parody of the natural sciences within a fantastic world full of peculiar characters.«
Hörzu

»With its unbeatable wit, the colourful and charming story of ALPHA & OMEGA got me hooked until the last page.«
radioeins bestseller list #5

»You won't find a more abysmal, sharp-tongued and funnier portrait of contemporary sense and nonsense crises since Douglas Adams’ 'Hitchhiker’s Guide to the Galaxy'.«
Tiroler Tageszeitung

»Told in baroque opulence and with plenty of wit.«
Dresdener Neueste Nachrichten