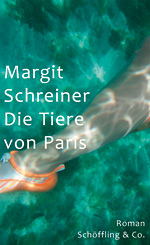 Margit Schreiner
The Beasts of Paris

In a bluntly ironic monologue, a woman reports on the complicated three-way relationship between herself, her ex-husband and their daughter. Even during their marriage, a development begins to emerge that she initially refuses to see.

The narrator, an academic and non-fiction author working on urban geography, landscape spaces and going astray, attempts to cope with life with her child after the separation without self-pity. Yet piece by piece, the catastrophe of a divorced family is revealed. Torn between her parents, the daughter has to find her own way.

DIE TIERE VON PARIS is set in Paris, Tokyo, Vienna and Italy and unfurls a broad panorama of different ways of life. A deceptively simple novel about the compatibility of raising children and having a career and men and women’s roles in today’s world.

»Margit Schreiner is the mistress of the banal, of comedy robbed of all illusions.«
Literaturen

»It is the mixture of the ordinary and the outrageous which distinguishes this novel. (…) DIE TIERE VON PARIS is a special book because it deals with the blind spot in every divorce: the child, who feels responsible for both parents, tries to please both, and finally looses its own balance.«
Süddeutsche Zeitung

»Margit Schreiner’s new novel with the enigmatic title DIE TIERE VON PARIS is written with chilly passion, formally inventive and stilistically controlled. All the misfortune and failure that is developed in the book will take your breath away. (...) A very strong and irritating piece of prose.«
Neue Zürcher Zeitung

»Schreiner has a subtle, humorously articulated sense for the power of the factual, for the impotence of the (feminist) ideal, and for the smallest shifts in interpersonal power. (...) It is an exercise in going astray, which assumes a metaphorical meaning in the light of today’s complex family relationships.«
Der Standard

»In its dismalness this novel is an antidote to all those vain books of debates of career women without children and all those esoteric-purring non-fiction soothing books. As in her earlier novels, Margit Schreiner is not at loss for humour and sarcasm.«
Südwestrundfunk (SWR2), Die Buchkritik

»Schreiner skillfully intermingles the trivial with the exciting, the ordinary with the exceptional. (…) Schreiner's aim is not to create feminist parables or to divide the world into good and evil, but rather to show how everybody – man, woman and child – has to struggle to lead a half-decent and happy life, with no guarantee of success.«
Österreichischer Rundfunk

»The literary twist in Schreiner’s family inspection is the second-person narration. (...) The author deals with the central conflicts in our society.«
Die Presse

»Margit Schreiner, approved specialist for the every-day madness of relationships, again deals with a contemporary problem: conjugal war involving a child. (…) Schreiner is not one for lenghthy and circuitous palaver. She narrates clearly, laconically and in short sequences. Life is complicated enough. Literature should not make it more complicated., but rather tell what it is all about.«
Oberösterreichische Nachrichten

»Not without reason, Margit Schreiner's language is being perceived as ›gentle‹ and it never loses its ease because it never lacks an essential element: humour.«
Literaturhaus.at

»In a friendly conversational tone you find out about everyday events, banalities and family issues but at the same time Schreiner bluntly dissects man’s and woman’s different role models and reveals them in their ridiculousness. A woman’s story told in a seemingly casual way in which emotional depths and chasms of human quest are being made visible in an artful and radically subjective way.«
Bn.bibliotheksnachrichten

»The boldly chosen female narrator (...) enthralls the reader up to the last page by her straightforward manner.«
Bücher (starred review)

»The ironic soliloquy of a single mother that relentlessly exposes the triangular relationship between herself, her ex-husband and their child.«
Österreichischer Rundfunk (TV)

»Margit Schreiner is a pitiless, ungracious recorder of the usual varieties of togetherness. (…) The book ends in catastrophe, but again Schreiner stays cool and stops herself at the smallest signs of sentimentality. (…) Her conclusions are sophisticated, laconical and subtle.«
Literatur und Kritik

»Margit Schreiner has such a great dry, ironic and Austrian style of writing, which always seems to be intermingled with a slight moaning.«
Kommune