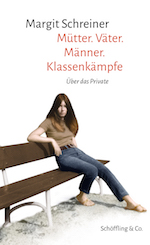 In her first memoir Father. Mother. Child. Declarations of War, Margit Schreiner writes about the 7-year-old Margit, who invents a steadfast female dachshund named “Bella”. In her latest book Mothers. Fathers. Men. Class Wars, a maharaja later occupies her thoughts while the little girl, in the form of a panther, lies at his feet before a bejeweled throne. Yet this glorious time also eventually comes to an end “and I sat at my desk and solved math problems.”
From the perspective of her seventh decade and with few words but much empathy, Margit Schreiner observes and describes the girl she once was: going to Gymnasium, finding new friends, becoming politically aware, having her first sexual experiences, and finally finishing school. “I had already suspected in my childhood that the fact of being a woman would go hand-in-hand with humiliations. But that it would go that far ...”.
It is just as true for this book: “Schreiner is Austrian literature’s queen of insubordination. Her writing is funny and full of mirth but she is also sly.”
Anton Thuswalder, Literatur und Kritik