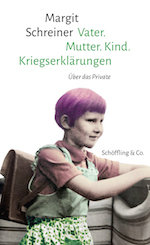 “The seventh year of age is, I believe, mercilessly underestimated. Our eyes are fixed on puberty, but in fact puberty begins much earlier. There’s a lot that has to be pent up first, until eventually it bursts out like an explosion.”
These are the furious opening lines of Margit Schreiner’s new book, which deals not merely with the development of a seven-year-old but also with the perspective of an adult looking back on the child she once was.
“What do I – a sixty-six-year old sitting writing in a house on the edge of a nature reserve – have to do with a seven-year-old? Am I inventing this seven-year-old by writing about her, or did she really exist, and if so, was she utterly different to the girl I describe? Is any aspect of this real, or are they chimeras on the horizon of a windy, clear-as-glass day? When I stand in front of the mirror, I can find no sign of this seven-year-old in my face. It’s all simply in my head, its universe and parallel universes.
In Father. Mother. Child. Declarations of War, Margit Schreiner has written the project of a lifetime, a book about childhood, memory and growing up that is unprecedented in German-language literature.