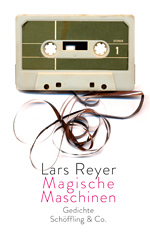 Lars Reyer guides his readers through industrialised landscapes. Down »macadamed streets«, past the »electric pasture fence«, down »stairwells« and »into the basements«; the »hollowed-out spaces of ex-industry« blossom before us, a »magnificent end of the woods«. No escape, no flight is possible – where to?
We follow him into an intoxicating world, we hear his tapes, admire his borrowings, from Robert Gernhardt, for example (»I can’t write in tercets«) and drink his schnapps from »juniper berries, white clover«. »Bodies go in the end,« says Lars Reyer; and he also says: »Son, don’t come back.« We don’t believe that one.

»Poems consist of words. But only someone who engages with them deliberately and artfully is in a position to set them down in such a way that from only a few words a film unfolds, in which every scene gives a sense of passing time. I know barely a poet of the young generation who can do that so well and so often as Lars Reyer.«
Norbert Hummelt

»Lars Reyer`s most impressive poems are able to evoke whole scenes in our mind. By choosing and arranging words in a highly elaborated way, the poet creates very complex aethetic constructs, which exceed the level of content to a level of open meaning. Reyer develops a magic voice, which invites to trust his enchanting perception and follow him into the world of sublte lyrics.«
www.fixpoetry.com