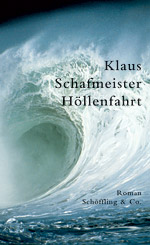 Engelke Christensen is the only child of Paale, an island innkeeper and whisky smuggler. After her father suffers a stroke Engelke reluctantly returns to the small island in the shallow coastal waters. But all of her attempts to run not only the inn but also her father’s dubious business dealings draw her further into the maelstrom of her deadly family history, which finds its violent end in the Hamburg flood of 1962.

HÖLLENFAHRT is the tale of the final days of a family for whom the words morality and humanity have lost their meaning. But at the same time, it is the story of a young woman and her desperate attempts to leave her history behind her.

»Diving into the abyss of human life, an archaic struggle for existence, unfolding an aura of magical poetry. (...) The reader is swept away by the rough atmosphere surrounding the old smuggler island, by its climate and bizarre ensemble of inhabitants, their stories and legends. (...) Such dense, fast-paced novel; such strong, phantasmagorical language.«
Neue Zürcher Zeitung

»Not one of the very young generation, but no less promising an author, a very convincing debut«.
Echo

»Klaus Schafmeister hauntingly describes the eccentrics, the secretiveness, the narrowness of this fictitous island – and the tempest that sweeps everything away.«
GEO