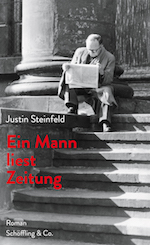 A Man Reads the Paper, a novel based on autobiographical events, tells the story of Leonhard Glanz, a Jewish businessman from Hamburg. Condemned to inactivity while in exile in Czechoslovakia, he spends his time reading newspapers in the coffee houses of Prague. He keeps scrupulously up to date with political events through the daily press, yet he cannot come to terms with his own fate or the situation that drove him into exile. Memories of his lost life, observations on the street and thoughts about what he reads in the paper – many of which lead far back into the past – are woven into a dense panorama of the 1930s.

Atmospheric and precise, wise and poetic, Justin Steinfeld’s only novel captures the bubbling cauldron of Europe on the eve of World War II. A powerful novel about the experience of exile, only published posthumously, it puts into words an experience that seems extraordinary yet affected and affects so many: the experience of belonging nowhere anymore.

»This novel is a great literary chronicle of a time of 'dreadful misery'. (...) an important work in German-language exile literature (...).«
Bayerischer Rundfunk