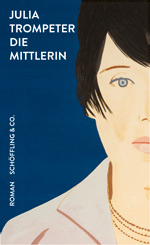 »Julia Trompeter takes a bold look at the moment where one's desire to write tends to falter when confronted with the great masters. Witty and charmingly defiant, she deftly finds her own voice as she goes head to head with her heroes.«
Rolf Dieter Brinkmann Grant 2012, The Jury

»Julia Trompeter's literary exercise sucks in the entire world. Her humor tips over into emotional moments, condenses to luminous parts, smaller epiphanies. One wants to read everything there is by Julia Trompeter, from the poetological major novel to the sound poem.«
North Rhine-Westphalia Advancement Award 2014, The Jury


What do you do when a literary agent commissions you to write a novel, but unfortunately you know nothing about communicating a story?

The young woman tasked with playing the challenging role of narrator is thrown into consternation. She tries to set about writing under the influence of the Austrian author Thomas Bernhard and the ancient philosopher Aristotle. But before she can face up to who she really is, she has to deal with the outside world, and is drawn into a maelstrom of absurd events. By actively engaging with literary tradition, she develops, with increasing self-awareness, into the narrator of her own story.

In her debut novel, Julia Trompeter delves into the literary world and the Berlin scene, boldly takes on some literary greats, and tells an unconventional and entertaining story of self-discovery.

»DIE MITTLERIN nearly comes out of the immaterial void dealing playfully with Thomas Bernhard, Plato and daily procrastination. One of the funniest books of the year!«
Die Literarische Welt

»Julia Trompeter and her narrator only need a few sentences to create an entire world. In fact, she easily manages to make us believe most of it. An enchanting page-turner.«
Frankfurter Rundschau

»Many of the neologisms resulting from such self-examination are of a brilliant linguistic and intellectual quality. (...) In her first novel Julia Trompeter sets out to discover language and thought in a fascinating way, taking the reader in with a linguistic performance that resonates beyond the text.«
Bayerischer Rundfunk (BR2)

»DIE MITTLERIN is an eloquent, multi-faceted novel with a profound humour at second glance. We hoped it might never end (…)«
Westdeutscher Rundfunk (WDR 5)

»The further the novel proceeds, the more power it gains, because the author – with increasing virtuosity – plays with the various layers of reality and her own fantasy. This gives her the opportunity to sprinkle her work with associative leaps that sometimes bring about realisation and always have a surprising effect.«
Frankfurter Neue Presse

»DIE MITTLERIN is a smart book-in-book-in-book arrangement and refutes the prejudice that German literature knows humour by hearsay only. Julia Trompeter turns out to be a remarkable parodist of the so-called literary scene, a business depending on coincidence and serendipity.«
profil

»Reminiscent of postmodern novels from the early Seventies, Julia Trompeter's metafictional construction reads like Raymond Federman's ›Double or Nothing‹ - in a refreshingly old-fashioned way. A highly enjoyable read.«
Titanic

»Julia Trompeter succeeds in mastering what Thomas Bernhard did: Each sentence stands symbol for the protagonist's quest for making sense – of literature, the Berlin scene and life as such.«
AVIVA

»This debut is absolutely worth reading.«
Gießener Anzeiger

»Fortunately Julia Trompeter has a necessary devil-may-care attitude and self irony. With delight, she lets the attempt of a love story burst like a bubble.«
Kölner Stadt-Anzeiger