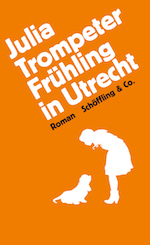 Klara just wants to get out – out of the rubble of a broken relationship and a failed career as a pub landlady, and above all out of Berlin.
Choosing Utrecht for her fresh start, she keeps a diary in which she notes down the sometimes miniscule but still confusing differences between her former city and her tranquil new home. Yet her new life proves less than straightforward. Soon she is overwhelmed by memories, and realises she has to come to terms with her past and with her split from her ex-boyfriend Hauke. Playing an important role in this process is Thijs, a handsome man with light-brown curls who is scandalously ten years younger than her. Yet Klara doesn’t find herself through him either; ultimately, she comes to understand that freedom is something you have to obtain for yourself – and that emotional security can only be found by looking within.

Julia Trompeter captures the emotional world of young people who feel at home throughout Europe and in several languages, yet are sometimes lost and lonely. A wise and wonderfully buoyant novel about today’s unbearable lightness of being.

»What a charming book, what a winsome heroine.«
»Utrecht may never have been portrayed as nicely.«
Martin Oehlen, Kölner Stadt-Anzeiger

»Very poetically, Trompeter links her experiences as a German in the Netherlands to philosophical reflections on the subtleties and differences of language(s).«
Maike Schiller, Hamburger Abendblatt

»Julia Trompeter has written an intelligent novel about the challenges of freedom.«
Johannes Schröer, Domradio

»A savvy novel about the challenges of freedom.«
mokka