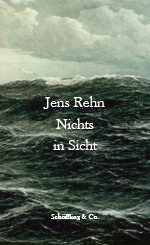 Jens Rehn
Nothing in Sight

fiction
With an afterword by Ursula März

It is 1943. A German submarine commander and an American pilot are stranded on a rubber dinghy, floating alone in the middle of the Atlantic Ocean. Both sit, hoping to be rescued, but there is no hope in sight. The stage is thus set for this hypnotic existentialist parable, a rediscovered classic in the literature of World War II.

In a terse, almost clinically exact style NOTHING IN SIGHT distils the brutal essence of what it is to die alone. Much more than a story of war, this short novel presents the memories, dreams, and hallucinations of two soldiers as they drift toward death. With nothing in sight on the horizon, Jens Rehn directs our view inward, into the minds of both men as they question the meaning of life, the existence of God, and the possibility of enduring human relationships.

When NOTHING IN SIGHT was first published in 1954, it was Gottfried Benn who called the book »rebellious, cynical, brilliant«. Siegfried Lenz described it as »hypnotic, unrelenting«.


»NOTHING IN SIGHT, with its dramatic situation reduced to the barest minimum, the two men in the boat and nothing else, and with the action limited to noting but their impending and inevitable deaths, succeeds in bringing readers to the point Rehn is interested in showing to us, the moment of complete existential despair, both in the context of the German Zeitgeist of the 1950s and beyond, timelessly and universally. Rehn’s is a war story for all time.«
University of Chicago Press, Kenneth J. Northcott

»Tempered, hardened, mercilessly precise, as if written with a dagger.«
Siegfried Lenz (1954)

»It cannot be stressed enough, NOTHING IN SIGHT should not be, must not be forgotten: It is both a work of art and a document of contemporary history.«
Marcel Reich-Ranicki, Frankfurter Allgemeine Zeitung

»A genuine voice of the postwar period. A remarkable document.«
Süddeutsche Zeitung

»Still a masterpiece. Even fifty years after its first publication.«
Focus

»A post-war novel without patina or dust but with saddening relevance. War everywhere and still no reason, nothing in sight.«
DeutschlandRadio

»A remarkable book that proves himself to be an outstanding author; as if Thomas Mann had only written the Venice-novella.«
Frankfurter Rundschau

»A great piece of literature, moving and, above all, timeless.«
Ralf Bosen, Deutsche Welle

»Timeless, but perhaps more relevant than ever.«
Buchkultur

»It is difficult to imagine a modern war story as philosophically or existentially enthralling as Rehn’s. (...) The closest recent analogue to Rehn’s apolitical, contemplative war novel is Terrence Malick’s rendition of The Thin Red Line.«
The New York Sun

»There is a Beckettian sensibility to Rehn’s terse prose, a grim recognition of life’s absurdity.«
The Sunday Times

»Here is a novel about war that contains very little of war yet has the power to hypnotise in its chilling horror and clinical, almost brutal, distillation of how it feels to die.«
The Australian