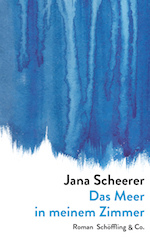 Jana Scheerer
The Sea In My Room

When Jolanda’s father Pax dies just before her final school exams, her mother can’t believe it. Jolanda has to go to the hospital to check if he’s really dead. It’s true – time of death three twenty-three a.m., she’s told. Yet her mother still refuses to accept his death. Feeling confused and stunned, Jolanda and her younger sister Lilli play along. But this pretence of normality is fragile. Memories of life with Pax keep catching up with Jolanda: the guesthouse he ran on the North Sea, which never hosted a single guest; his tempestuous unpredictability; his passionate, furious, crazy search for a lost shipwreck. When little Lilli runs out onto the mudflats one night, desperate to find their father, the lie nearly leads to disaster. Jolanda has to act.

Jana Scheerer’s novel The Sea in My Room depicts a family that loses its core and has to reinvent itself anew – together and as individuals.

»A silent story of farewell and letting go in front of a fantastic scenery: an old house on a hallig close to the North Sea coast.«
Jacqueline Masuck, der divan in Berlin

»One hears Jolanda thinking, speaking, feeling: This closeness that emerges during reading is the compass that guides through the book. As through the mudflat, before the tide comes in.«
Peter Helling, NDR Kultur