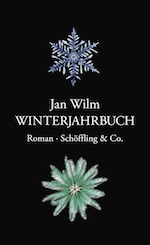 Jan Wilm
The Yearbook of Winter

He’s a foreigner, wandering beneath the palm trees, in the coastal city under the ever dazzling sun, and that is his misfortune. Jan Wilm is an aimless academic, a philologist devoid of future prospects. He has left his German academic past behind, and – to stave off unemployment – he is spending a year doing research in Los Angeles, funded with money from home. His object of research – in the Golden State, of all places – is snow.
Wilm is expected to spend the year going through the estate of the forgotten photographer of snow, Gabriel Gordon Blackshaw (1898–1950). But how to write a book about snow in a place where it never snows? And how to forget a woman who you’ve lost and who binds you to your home, because you cannot stop loving her and you fail to forget her?

Loss, the loss of self, death, and the vague reality of one’s place in the world – how can a language be found to grasp these, a language that is at once able to archive and to obliterate?
THE YEARBOOK OF WINTER employs and expands the possibilities of literature. It points toward the future of literary language yet is also a homage to its literary traditions.


»In Jan Wilm’s THE YEARBOOK OF WINTER, the always fascinating yet virtually unknown work of the Californian snow photographer Gabriel Gordon Blackshaw is given a moving and extremely interesting appraisal.«
Christian Kracht

»What Uwe Johnson did for New York, Jan Wilm has done for Los Angeles: He has made the city his own. His diary-novel is a masterpiece of metafiction, fueled by meta-yearning.«
Joshua Cohen

»The dark, the sad element in this intellectually challenging book that is also captivating in its fierce negativism - it all results from the intellectual's own emotional captivity.«
Kai Sina, Frankfurter Allgemeine Zeitung

»Wilm´s narrator hesitates, is at odds with himself, loses his way. (...) Precisely because of this, in his evident artificial self, he is much more authentic and closer to real life than many characters from other contemporary novels.«
Beate Tröger, Neue Gesellschaft Frankfurter Hefte

»The narrative passages are graphic, impressive, and yet quite unlike anything that can be found in German prose at the moment. (...) The author is way ahead of the literary zeitgeist.«
Miriam Zeh, WDR 3 Gutenbergs Welt

»Jan Wilm´s auto-fictional novel is (…) a delicate composition. Its cold thesis of the loneliness of man percolates down to the micro level of individual sentences.«
Lisa Kreißler, ndr Kultur

»One of the most beautiful declarations of love for a city I have ever read. With Wilm, a great talent has entered the literary scene.«
Bookster HRO