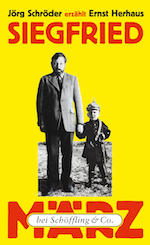 One of the most exciting books in German literature is being reissued in a significantly expanded edition: SIEGFRIED (first published in 1972), the tell-all book about the legendary, culturally revolutionary publisher März-Verlag and its founder, Jörg Schröder.

Covering his childhood, his training at a bookshop, his jobs at various publishers and eventually the setting-up of his own publishing house, Jörg Schröder has described his colourful life to biographer Ernst Herhaus. His memoir is a reckoning with the cultural establishment – distasteful, fascinating and candid. Numerous legal cases were brought against SIEGFRIED, all but one of them won by Jörg Schröder. Later editions of SIEGFRIED appeared with several blacked-out passages.

This new edition features an extensive appendix tracing the work and its reception history to the present day.

»A confession, a piece of revelatory literature more ruthless than German writing has seen in a long time.«
Der Spiegel (1972)

»A flashy, remarkable book (...), exploring the relationship between narration and indiscretion. (...) A book about publishing houses, brothels and binge drinking, but also about a childhood under National Socialism and in the early post-war years.«
Jan-Frederik Brandel, neues deutschland

»An ingenious self-disclosure. Anyone who's still interested in what reading is about should read this.«
Dietmar Dath, Frankfurter Allgemeine Zeitung

»Jörg Schröder is a legend in German publishing. (...) Unlike so many autobiographical books, this one shows no traces of patina.«
Annett Gröschner, Süddeutsche Zeitung

»A book about the sexual revolution finding its feet.«
Florian Felix Weyh, Deutschlandfunk

»A ›cult book‹ which for once deserves the term.«
Philipp Haibach, Literarische Welt

»A ludicrous record of a time when everything seemed possible.«
Claus-Jürgen Göpfert, Frankfurter Rundschau Online

»Schröder’s actual talent as narrator lies in the attention he pays to psychological and social dynamics within every microcosm.«
Jan-Frederik Bandel, neues deutschland

»Schröder reveals the truth of the underground to all those who want to read, know and understand rather than treading water in the mainstream.«
Wiglaf Droste, junge Welt

»Like no other book, SIEGFRIED combines publishing and cultural history with the history of the Federal Republic of Germany.«
Ulrich Faure, BuchMarkt