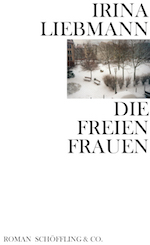 >> A journey to the past turns into a reckoning with the limits of female freedom.

Elisabeth Schlosser feels wrong—wrong in her apartment, wrong in her city, even wrong in her life, as if she should be someone else—but who?
As Berlin sinks in snow, she sits in her apartment in a greenish, crumbling building at Hackescher Markt and pours her heart out to her 100-year-old pen pal: her adult son in the kitchen won’t eat or talk to her, his father pops up only briefly and leaves again with nary a word, and she has failed to write the drama that she has always wanted to write. How can it go on like this? She finally tears herself away and sets off for Poland. It is there, where her family once lived, that she believes she will find an answer to who she is and who she is not.
In a dense, musical prose, The Free Women tells about the longing for what has been buried—buried beneath new beginnings, beneath history, and beneath the failures of those who came before us. And once again, Irina Liebmann tells a story about her city—about Berlin and its women.