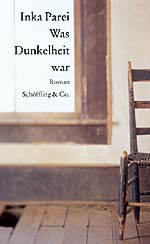 Inka Parei
What Darkness Was

An old man lies in his bed near death, when he sees a suspicious-looking stranger in the stairway. The night seems interminable as each noise stirs up memories and fears. His observations throughout the gruellingly long night hint at his own life story, centered around his post-war guilt. Discovering the identity of this stranger in his house becomes the old man’s final mission in life.

Inka Parei, whose debut novel DIE SCHATTENBOXERIN has been called »an urban, vivid novel... displaying an almost criminologically precise appreciation of detail« has been published in eleven countries.

»My vote goes to a text which has an utterly entrancing voice of its own and in which the tiniest detail takes on an importance. A magnificent achievement. I feel as if I've heard literature for the very first time.«
Iris Radisch, DIE ZEIT

»With a cool power Inka Parei guides our view of the old man’s home like the camera of a documentary film: pictures of incredible precision and clarity.«
Elmar Krekeler, Die Literarische Welt

»Only once did I thank an author at this event for his text. Now is the time to do this again.«
Josef Haslinger

»This text shows literary necessity. Something is said that is absolute truth. You can point at it and say: Literature.«
Ursula März, Frankfurter Rundschau

»A superb piece of literature, and the most stunning lesson in German history in a long time. A perfectly dramatized scenario of death approaching, a flood of images growing from the dark of the past. Inka Parei’s writing stands without comparison, turning darkness into light, adding color to the dullest of greys.«
Die Literarische Welt

»Employing an immensely sophisticated and complex language, Inka Parei accompanies the living and dying of a retired post office clerk – blossoming into a major novel of our times and society. (...) A most impressing piece of literature, a liminal reading experience.«
DIE ZEIT

»The poetic powers of persuasion and imagination mark the signature style of Inka Parei. (...)
Her lucent, concise sentences radiate compelling objectivity (...), adding up to form a mystery, transforming the real and tangible into a surreal dream world that exists in our imagination only. (...) As reality passes into hallucination, Inka Parei proves herself a master of such smooth transition.«
Frankfurter Rundschau

»Artfully composed, told in an unobstrusive style, in a sophisticated setting. A great piece of literature.«
bücher

»Inka Parei masterfully moves through the twilight zone of human consciousness, between death and dream (...) The house of the old man becomes a metaphor of human existence.«
tageszeitung

»Such amazing clarity of perception (...), with the acuity and graphic detail of a masterly black-and-white photograph. (...) Parei’s novel radiates a unique aesthetic quality of silence.«
Süddeutsche Zeitung

»A careful analysis of human perception, of memories fading, and the denial of memory itself. (...) A novel of stunning detail, an almost photographic portrayal of reality (...) One of those rare magic moments in literature.«
Nordkurier

»The entirety of German history is comprised in this ›twilight zone‹ between death and dream.«
Neues Deutschland

»There’s no contemporary author who could ever draw level with Inka Parei as to her accuracy of perception.«
Saarbrücker Zeitung

»Inka Parei’s writing skills can only be marvelled at. (...) This novel sweeps the reader straight into the chilly realm of darkness which has hardly been depicted as vividly by any other contemporary author.«
Die Rheinpfalz

»Attentively and with great precision, Inka Parei tells of a perishing life. A quiet novel, yet of enormous dramatic potential.«
Tagblatt

»WAS DUNKELHEIT WAR will still remain when other contemporary attempts at a literature of memory have long been scattered to the four winds of literary fashion.«
Stuttgarter Zeitung

»Unfolds great power by means of a concise language and a most intensive atmosphere.«
Radio Bremen

»Not every writer enters the spotlight as triumphantly as Inka Parei.«
Berliner Zeitung

»Her focus is on the relevance of each moment, turning even the slightest perception into a revelation.«
Salzburger Nachrichten

»Parei succeeds in weaving a complex microcosm around her solitary protagonist, without resorting to sentimentality.«
Berner Zeitung

»Very few writers of the younger generation who approach the subject of memory bear comparison with Parei in terms of her accuracy of perception. She explores the subtle details, the nuances of life, taking stock of an entire human life from the remains of one single day.«
Der Tagesspiegel

»In WAS DUNKELHEIT WAR (…) Inka Parei skillfully interweaves the small, individual story of a postman’s life with neuralgic moments of German history – the crimes of the Second World War and the ›Heißer Herbst‹ 1977, in which the terrorist attacks of the R.A.F. shocked the Federal Republic of Germany. As it is here, all her texts are about memory, forgetting, repression, guilt, traumata, self-assurance – and the search for salvation.«
Deutsche Welle (broadcasting station)

»A literary thriller and a philosophical essay simultaneously, leading the reader to question whether the past is ever truly in the past and whether our perception of the present can ever truly be trusted.«
GBO, New York

»Gradually, Parei tightens the noose the old man is caught up in. (...) WAS DUNKELHEIT WAR presses towards the light– in every sense of the word.«
Financial Times