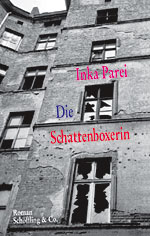 Berlin, the Nineties: When one day Dunkel disappears without a trace, Hell, living opposite her in a dilapidated side wing, decides to track her down. The trail leads to March, a young man who carries the spoils from a bank robbery around in his rucksack, but it also leads to the man, whose attack led Hell to become a shadow-boxer.

An urban, vivid novel it is physical in its narrative, dense in atmosphere, and displaying an almost criminologically precise appreciation of detail. Presenting the period when the wall came down and reflecting that strangely unfathomable, illdefined and ultimately undefinable way of life, just as threatened existentially as threatening, that is only to be found in Berlin amongst those who occupy the no-man’s land between East and West.

»Parei's narrative shifts back and forth, revealing Hell's past as it deals with her present. Her characters' nontraditional lifestyles are beautifully portrayed. The setting of her novel, those parts of Berlin that tourists never see, are as evocative and unsettling as Ian McEwan's depictions of Venice, and England. Her prose is vibrant with life, energetic and precise; almost as if the spirit of kickboxing infused her writing.«
GBO, New York

»The plot is intriguing; it is even blackly funny.«
The Economist

»Inka Parei's novel is magnificent. This debut is a promise.«
Frankfurter Allgemeine Zeitung

»The debut of a great literary talent.«
Hamburger Abendblatt

»There is enough in this novel to show a great talent.«
DIE ZEIT

»This novel is best example for showing that authors of young german literature succeed in writing well - and gripping.«
tageszeitung

»This young author is just made for the art of writing.«
Frankfurter Rundschau

»Hell, last occupant in a dilapidated house, is fighter in the jungle of the otherwise withheld reality in Berlin. She turns into Pippi-Longstocking of the Nineties knocking down a mafioso.«
Focus

»Berlin-Literature at its best: a thriller, carefully composed.«
Welt am Sonntag

»The great virtues of this novel are its immediacy and physicality.«
new books in german

»No stranger to dark urban literature (see Clemens Meyer's All the Lights), Katy Derbyshire tackles Inka Parei's fragmented novel of lost souls in 1990s Berlin with aplomb. DIE SCHATTENBOXERIN depicts a city that hardly exists now, a no-man's land of derelict tenements, scrubland around train stations, existences drifting between morning bread-rolls and night-time cold. (...)
The sparse language befits the bleakness, its symbolism, however, nods to the resilience of the Berlin spirit, and hope glimmers: ›Between weed-green blocks of stone, it has pushed its way out of a crack, a knotty, crooked maple that never sees the sky but still survives, a tough creature. Living on (...)‹ «
The Independent

»A novel from the underside of modern Berlin, beautifully written.«
the complete review

»Uncanny, masterfully structured novel. DIE SCHATTENBOXERIN is a political fable in contemporary motifs: never simple allegory, but through the story of these two women offering a profound commentary on existence in fractured and then reunited Berlin. DIE SCHATTENBOXERIN is marvelously made, strange and commanding, its deep political insight resonating perfectly from within the novel’s architecture. (...) With Parei’s frugal and brutal prose, the reader immediately sees the rotting, barren buildings and neighborhoods, the poverty of her life, and an overwhelming sense that Hell is a forgotten human being. (...) «
Three Percent (University of Rochester)

»A sharp and striking novel of bleak and challenging life in Berlin right after the Wall came down but before boom conditions gave hope for change.«
Shelf Awareness

»The book tells a harsh story, yet it is never downright depressing, a balance which is due to Parei’s clever structure and to the distinctive voice of her wary protagonist, the Shadow-Boxing Woman of the title. In its imagery and use of the cityscape, the book draws on a tradition that includes Alfred Döblin’s Berlin novels and Gottfried Benn’s early poetry. It also draws on the rhythms and anxieties of crime writing, producing a novel that is suspenseful, dark, funny and bleakly elegant.«
shigekuni.wordpress