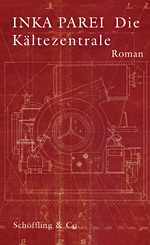 Berlin, 2006: a man worked as a mechanic in the building of the East German party newspaper Neues Deutschland during the 1980s and later left the GDR.
One day his ex-wife, Martha, calls him up. She’s in hospital, waiting for an exact diagnosis of her cancer. In an attempt to help her, he returns to Berlin and tries to reconstruct the events of several days in early May 1986.

Was a Ukrainian truck Martha came into contact with contaminated with radiation? Why does the death of a workmate, for which he blamed himself for many years, suddenly appear dubious?
The narrator soon begins to lose command over his days in Berlin, drifting into a desperate search for orientation triggered by a fracture in his life with which he has never come to terms.

Following DIE SCHATTENBOXERIN and WAS DUNKELHEIT WAR, DIE KÄLTEZENTRALE is Inka Parei’s third look at the »centre« of German history.

»… builds up a tremendous pull, an inner tension until the last page.«
DER SPIEGEL

»If you are prepared to engage in the frenetic search for truth, this book is as enthralling as a thriller.«
Frankfurter Allgemeine Zeitung

»Inka Parei is a virtuoso of short and concise sentences.«
Frankfurter Allgemeine Zeitung

»A novel of surreal appearance.«
Tagesspiegel

»Most impressive about this book - besides the cleverly treated German subject - is the precise and clear language. Inka Parei writes uncomplicated and beautiful sentences that you want to read over and over again.«
Financial Times Deutschland

»Themes of confusion and identity, change and conformity jostle with one another to reflect with skill the narrator's inner turmoil.«
new books in german

»Inka Parei does not deal lavishly with words, and this is just what avid readers admire about her. In a dry, prosaic style, she takes them into the GDR's past.«
Frankfurter Rundschau

»Inka Parei has familiarized herself perfectly with the topic. A masterpiece of empathy and adaptation.«
Frankfurter Rundschau / Berliner Zeitung

»This novel has a particular thrill«
DRS 2

»This book is a triumph of empathy. A great read!«
Berliner Morgenpost

»The reader is impressed by the author's strength of language, empathy and high literary standards.«
Der Standard

»Following the artful entangled leaps of time requires a considerable degree of concentration. Who gets into this dense story will be rewarded – with a precise, complex and a very own prose.«
Deutsche Welle (broadcasting station)

»Inka Parei’s new novel is about the persistent strains of regulation, both literally and metaphorically. It is about the behaviour ethics of coldness, about technical and emotional incidents, about the fear of loosing control. It is about the inability of closed systems, be it the GDR or the individual awareness to be able to see oneself from the outside.«
Literaturkritik

»Parei's way of penetrating the GDR with her topic, the functioning of memory, has class and makes the reader shudder when he begins to suspect the horrors of dictatorship.«
Augsburger Allgemeine

»Inka Parei's novels are detective-like quests, highly precise linguistic attempts to explore and secure the gaps of historic memory. (…) Thanks to her subtlety of construction and linguistic talent, Inka Parei conveys the piercing coldness of the GDR. You feel this coldness from the very first page, and you cannot escape it.«
Die Rheinpfalz

»DIE KÄLTEZENTRALE is one of those books you immediately want to start all over again after having finished.«
Weser-Kurier

»DIE KÄLTEZENTRALE deals with inner homelessness, the loss of privacy and a feeling of continued anxiety, which the novel portrays in a technically excellent way.«
Kieler Nachrichten

»Inka Parei – a master of the subtle nuances.«
Neues Deutschland

»Parei must be admired for her literary cat-and-mouse game.«
Die Literarische Welt

»DIE KÄLTEZENTRALE is a clever confusion and puzzle game. The novel deals with the unreliability of memory, with memory lapses and wrong memories, with the loss of orientation and the splintering of an unstable self-concept into fragmented partial identities.«
RBB-Kulturradio

»Inka Parei is a specialist in making her own anxieties and those of others perceptible in her prose. (…) She is a labyrinthine narrator who is able to emotionally involve the reader in the protagonist's quest.«
Kommune

»From the perspective of the first person narrator, Inka Parei tells her story on three levels (...). Skilfully she interlaces the levels and lets their limits blur. By means of rumours and ambiguous signals she creates a tension, which gradually pulls the narrator into the centre of attention. (...) Inka Parei constructs her intertwined story with confidence and an astonishing degree of narrative economy.«
Aargauer Zeitung