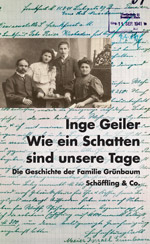 One day, in a wall panel behind the radiator in her flat, Inge Geiler finds a bundle of papers. They are loose notes, photographs, newspapers, postcards and letters, addressed to a couple who had lived in that room in the early 1940s. Meier and Elise Grünbaum, from Wiesbaden, had moved to a Jewish old people’s home in Frankfurt. From there they rented a room in the Jewish Nussbaum pension, where they lived until their deportation to Theresienstadt.

Only years later did Inge Geiler find the time to follow the traces of her »guests« and gradually pieced together the picture of a large family torn apart by the course of time. Embedded in the history of the 19th and 20th centuries, Inge Geiler tells the very moving story of the Grünbaum family, from its origins in Geisa and Forchheim to the US, where descendants of the far-ranging family live today.

»A spectacular discovery of documents from the NS era. An opulent and very personal book about the deportation of Frankfurt Jews.«
Frankfurter Neue Presse

»Bit by bit Inge Geiler reconstructs a family’s fate persecuted by anti-Semitism. The impressive convolution of records of despair and mementos is something very special.«
www.frankfurt.de

»An impression of the incredible sorrow of the Jews at the time of Hitler, depicted movingly by Inge Geiler.«
Hessische/Niedersächsische Allgemeine

»A discovery of extraordinary value.«
Esslinger Zeitung am Wochenende

»A book that will keep you awake. Stylistically confident, well-structured and embedded into historical reality Geiler tells the story of the Gruenbaum family.«
Giessener Allgemeine, Alsfelder Allgemeine, Wetterauer Zeitung