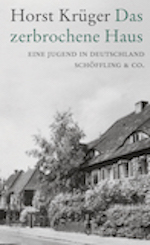 THE BROKEN HOUSE is a major rediscovery: one young man’s record of Berlin in Nazi Germany, and a sharp-eyed analysis of the lower middle classes, who were so ensnared by their ideology. Horst Krüger, who characterises himself as »the typical child of those innocuous Germans who were never Nazis, and without whom the Nazis would never have been able to do their work,« assesses the situation, determined to learn »what it was like back then under Hitler.«

The Germany in this book is not the Germany of giant torch-lit processions and endless ranks of jackbooted marchers. It is the Germany of the small Berlin suburb of Eichkamp, where the author’s parents lived their proper, non-political lives, believed in God and Law, respected »good Jews«, and were the very embodiment of level-headed, industrious Germany. The step-by-step account of how they were seduced by the vision of Hitler as their saviour and intoxicated by the promises of Nazism forms a drama all the more chilling for its lack of violence, and all the more damning for its lack of any conscious evil.

»Germany’s past cannot be overcome. At most it can be made present. This is precisely what Krüger has done.«
Marcel Reich-Ranicki

»This book offers no revelations; it’s not competing with the plain factual reports; it’s truth battling untruth, it’s a rumination, a difficult calculation that never adds up, an attempt to comprehend.«
Wolfgang Koeppen

»Horst Krüger, one of the formative voices of the German Federal Republic, remembers his childhood in Berlin, his resistance in the Nazi era, imprisonment by the Gestapo, and the unconcerned lifestyle during the economic boom of the 1950s and 60s.«
DIE ZEIT

»Krüger made it his lifelong task to fight against the return of right-wing extremism.«
Claus-Jürgen Göpfert, Frankfurter Rundschau

»An unflinching analysis of the German petty bourgeoisie during National Socialism.«
Manfred Papst, NZZ am Sonntag