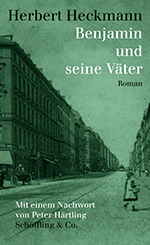 Herbert Heckmann
Benjamin and His Fathers

fiction
with an afterword by Peter Härtling

Benjamin Weis is born in Frankfurt in 1919, the son of single mother Anna, an assistant at a law firm. His father is nowhere to be found. Fritz Bernoulli, a lawyer, takes the young family under his wing, providing them with accommodation and board. Despite his difficult circumstances, Benjamin grows up sheltered, immersed in a world of Don Quixote and Robinson Crusoe, going on adventures great and small with his friends. Since his mother only ever answers evasively when questioned about his father, Benjamin keeps inventing new ones.

Heckmann depicts a vivid panorama of Germany in the 1920s and 1930s, from the perspective of a child whose questions mostly go unanswered. Why is his surrogate father accused of treason? Why does nobody step in when an alleged communist is beaten up on the street? Why does his Jewish friend have to emigrate to America? His conclusion: ›Damn all the fathers who’ve given us a life like this.‹

»Heckmann was a truly cultured man, one who played with his knowledge.«
Peter Härtling

»Heckmann tells his story with great love for his characters and for detail.«
Jörg Magenau, Deutschlandradio Kultur

»A journey through time to the vibrant and idyllic old Frankfurt. (...) Incidentally but in a very powerful way the author describes how National Socialism changes lives.«
Stefan Sprang, Hessischer Rundfunk (hr1)

»This is a light novel that explores what it means to be human in dark times. (...)
In the face of a broken future, this novel searches for resistance in the tenderness of ambivalence. The malleability of the narrative is evidence of this approach, a string of anecdotes related by association rather than being forced into a master narrative. The fragment-like ›Denkbilder‹, ›thought-images‹ of Benjamin’s namesake, Walter Benjamin, are never far from view. Ultimately, this offers an alternative to the temptation of viewing the world in simple dichotomies, which force apart the strong from the weak, the insiders from those who are excluded.
The publication of BENJAMIN AND HIS FATHERS is timely precisely for that reason. Heckmann offers us an opportunity to think, write and read about what it means to acknowledge humanity despite the violent sheen of ideology.«
New Books in German