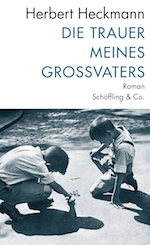 In My Grandfather's Sorrow, Herbert Heckmann, who was born in 1930, writes about growing up in Frankfurt’s Kuhwald housing settlement and he does it like no other. But beware! There are always “two pasts: one that is written down and one that was.” So his interest in the past is combined with his passion for story-telling. The narrator captivates us with his humorous accounts of his first experience writing on the chalkboard and of the childhood joy of being allowed to go to the public library by himself. Somewhat cluelessly if happily, Herbert and other boys spy on the pretty Mrs. Senft through the window as she dances naked in front of the mirror. And what misfortune when he is the only boy at his school to dodge whooping cough and get shut out from the excursion to the city that Frankfurt’s doctors have prescribed as a treatment!
Yet on a visit to the library, Herbert is also forced to witness as a Jewish man is gruffly turned away. Mrs. Senft’s husband falls in the Russian campaign and a disabled child from the neighborhood is sent to a sanatorium, never to return. National Socialism and the war cast their shadows on the narrator’s sensuous childhood world.