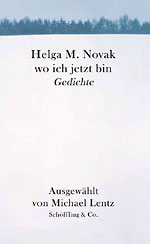 Helga M. Novak
Where I am Now


A representative selection of Helga M. Novak’s poems; she is regarded as one of the most important German poets currently writing. Compiled by Michael Lentz, a significant member of the younger generation of poets and winner of the most prestigious Ingeborg Bachmann Award.


»What awaits the reader? A pleasurable read, no: during the course of reading a sensual pleasure in the adept handling of language, enjoyment for the mind and for reflection.«
DIE ZEIT commenting on Helga M. Novak’s SILVATICA.

»The poetical work of Helga M. Novak stands as a prominent monolith. Unfaltering, staggering, without comparison, its language glowing with beauty. Nothing could ever replace these poems.«
Michael Lentz

»A poetic style more jagged than that of Ingeborg Bachmann, more adamant in its renunciation of conventional lifestyles than that of Sarah Kirsch... Helga M. Novak’s lyrical tones and images are an indispensable part of the discussion about poetry as a metaphor for the state of the world... Her global vision transcends continents and eras, constantly seeking new perspectives: political, social, historical, and environmental. Monologues, dialogues, reflections, portraits and episodes merge into a symphony of word and sound.«
Der Freitag

»One does not have to belong to the generation of Helga M. Novak to succumb to the fascination of her unrelenting snap-shots of history, her menacing ballads and fraying sonnets. Novak’s political poems denounce social inconsistencies and openly call our for civil disobedience. (...) Defiant, rough, untamed.«
DIE WELT

»Novak's prose lyric derives its poetical strength from a sensuousness that takes a direct and unsophisticated, shirt-sleeved approach to the world.«
»Her poems are like mighty rugged rocks, an experience of the sublime.«
Berliner Zeitung

»Helga M. Novak’s life spans over five decades of history, as reflected in her multilayered writing style. A book to discover and to embrace.«
Frankfurter Allgemeine Zeitung

»We succumb to the magic of her poetry.«
Neues Deutschland

»For all those who are not yet familiar with or have so far overlooked the work of the great German poet Helga M. Novak, this careful selection by Michael Lentz will open their eyes (...) Novak was never one to fall for the kind of art that relies on sumptuous imagery – her poems speak of existential necessity, making them utterly compeling.«
Saarbrücker Zeitung

»Her verses seem to float, expressing a lightness unequaled by any other German poet, with the exception of Sarah Kirsch.«
Leipziger Volkszeitung

»One could not agree more: ›Nothing could ever replace these poems.‹«
Badische Zeitung