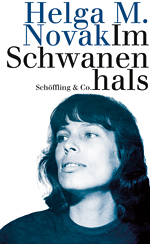 Helga M. Novak ranks among the most important German-language writers since the Second World War. Readers and critics have been enthusiastic about her work for more than forty years.

In her autobiographical prose work IM SCHWANENHALS, she describes her life in the 1950’s and 60’s as a young adult under the Socialist regime of East Germany, making an impressive witness to the time and place.
In 1954, Helga M. Novak, full of enthusiasm, begins a journalism course in Leipzig, but soon feels like an animal caught in a trap from which it cannot free itself. When the State Security Police (Stasi) tries to force her to inform on her fellow-students she resigns from the party (SED) and has to leave university. In 1957 she flees to Iceland with her Icelandic boyfriend, writes, works in fish factories and does not return to Germany until 1965. She attempts a new beginning by studying writing at the renowned Johannes R. Becher Literature Institute in Leipzig, but someone like her is not welcome – and in 1966 she is expelled from the GDR. Stateless, she leads an unsettled life that takes her all over Europe.

While Helga M. Novak’s prose and poems were acclaimed and widely reviewed in West Germany, her books were not published in the GDR. There her poems are only to be found in the files of the State Security Police.

»Helga M. Novak is a poet, an East German poet in the West, to me the greatest of them all. She has published a kind of confessions, an account of her life, of her early years in Hitler’s Germany and in post-war East Germany.«
Wolf Biermann

»Anyone who writes about German-language poetry and ignores Helga M. Novak is off the map.«
Michael Lentz

»One of our most excellent, utmost significant and prizewinning poets.«
Berliner Zeitung

»Breathtaking! (…) A necessary, magnificent book in every respect.«
Hessischer Rundfunk

»The reader of a book that deals with living in a dictatorship will expect to hear about hopelessness, self-doubts and depression. But how colorful and exciting it is described in this book! (...) After a while the reader realizes: Although her escape and revolt seem to be politically motivated, they are only conditionally linked with the GDR. Rather, they are an expression of her absolute urge for independence.«
Literarische Welt

»Helga M. Novak narrates excitingly and with immediacy, as if it was not over a century since the events.«
Signaturen (Online)