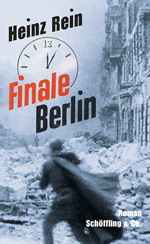 The last days of the Reich capital
fiction
with an epilogue by Fritz J. Raddatz

It is April 1945. As the bombs fall on Berlin, the Nazi regime makes a last stand. In the columns of refugees and among the disintegrating units of the German army, the SS Security Service and the Gestapo are still casting their nets for Jews, dissidents and deserters.
Amid the chaos, the young soldier Joachim Lassehn searches desperately for a hiding place. Friedrich Wiegand, a trade unionist, who was tortured in the concentration camps, tries to hasten the end of the war through acts of sabotage. The doctor Walter Böttcher helps those, who have »gone underground«, to survive their clandestine lives. And Oskar Klose's respectable bar is the meeting place for a small resistance group, who has the SS on their tracks.

In his great novel FINALE BERLIN, one of the first bestsellers of the postwar years with over 80,000 copies sold, Heinz Rein follows the thrilling fate of a small resistance group, plunging the reader into the atmosphere of the collapsing Nazi Reich.

»A magnificent rediscovery at the exact right moment.«
Deutschlandradio

»Among the best Berlin novels, sitting alongside Hans Fallada's Every Man Dies Alone and DIE STUDENTEN VON BERLIN by Dieter Meichsner. Well defined characters reveal a panorama of a National Socialist Germany at the time. A captivating story about the destruction of Berlin, a raging accusation, a moving contemporary document, unputdownable.
Süddeutsche Zeitung

»A felicitous journalistic discovery! FINALE BERLIN is one of those novels that need to be valued beyond their artistic quality. With a thriller-like tension from first to last page as a vivid example of the last weeks and days of the Second World War FINALE BERLIN can hardly be ranked high enough.«
Deutschlandfunk

»You have to read this book varying between documentation and colportage in order to grasp the full force and cruelty of these weeks.«
Der Tagesspiegel

»There is something strangely amorphous to this book that places narrative, documentary and debate next to each other without caring too much about dramaturgy, thereby producing a lasting impression of the Germans’ mental state after the end of the war.«
Rundfunk Berlin Brandenburg (RBB Kulturradio)

»There are not many depictions of this time that are written as meticulously as this novel – neither in a literary nor in a documentary way. Few had the presence of mind to take notes.«
Südwestrundfunk (SWR2)

»Heinz Rein’s novel is convincing due to its immediacy and its powerful, passionate descriptions. A book full of cracks and gaps, as raw, direct and breathless as the era that it shows in all its terrible distortions. An outstanding work, rightfully saved from oblivion.«
Literarische Welt

»Rein masters the stylistic device of montage with virtuosity, and without breaking apart the chapters, turning FINALE BERLIN both into an elementary history book and a gripping novel.
The chapter ›Vorfinale‹ is merely eight pages long, yet the ruined city of Berlin and the last weeks before the end have almost never been more impressively described.«
Berliner Zeitung

»This novel is ultimately worth reading due to its power as a testimony. (...) It is a great chronicle of ultimate immediacy.«
3sat Kulturzeit (TV)

»FINALE BERLIN is as great a rediscovery as Alone in Berlin by Hans Fallada was. (…) Very few books bring to mind the inferno of the end of war in such a nightmarish and intensive way.«
Frankfurter Allgemeine Zeitung

»FINALE BERLIN is an epochal document and compelling rediscovery (...). A true political thriller and page-turner pulling the reader right in, stumbling in breathless tension towards the redeeming capitulation. And it is a socio-historical and ideology-critical document of the highest quality, unmasking the National Socialism from within. (...) Recommended for younger readers especially!«
Frankfurter Rundschau

»You finish this big book in two evenings, it won’t let you go. That’s how it was, back then in Berlin.«
Frankfurter Neue Presse

»An important rediscovery. A precious piece of educational, documentary-like fiction with Berlin as its true main character.«
Bayerischer Rundfunk

»A wealth of facts of the last days of war in Berlin. Together with the gripping story of a resistance group this is a novel putting all previous publications of this kind firmly into the shade.«
Neues Leben

»The book grips you, compels your sympathy, repels, enthuses… FINALE BERLIN is a reckoning of accounts, it compels the reader to think and to process intellectually what it describes.«
Allgemeine Zeitung

»FINALE BERLIN is a historical document of the highest rank, outshining Plivier in its artistic quality. Heinz Rein evolves the writing style which was constructed by Erich Maria Remarque and others during World War I. (...) In an overwhelming array of impressions, we witness the horrid eradication of the Reich capital and a large part of its population with all of our senses, breathless, until the bitter end. A rare linguistic achievement.«
Die neue Literatur

»This book is an event.«
Mitteldeutsche Zeitung

»A book like a scream – and it’s astonishing how a scream may transport this kind of piercingly good documentary fiction.«
Kurier

»An exciting, rough, breathless and wild read. You can feel the immediacy of this text on every single page.«
Falter

»An impressive report (...). You follow the resistance fighters’ story with growing excitement. Will they survive the war?
(...) It’s like the former sportscaster Heinz Rein, who was banned from his job by the Nazis, wanted to note down immediately everything that happened to him and to his country.«
Westdeutscher Rundfunk (WDR 2)

»This book might not be a literary sensation – but all the more sensational is the fact that it was rediscovered and – hopefully - regained for many readers. Rein’s epic about the wounded Berlin during the last days of World War II must be rated extraordinary, fascinating, shocking, authentic – and: unique.«
Der Freitag

»Rein's narrative style is pacy, even breathless, it is full of strong images and a never-euphemizing eloquence that, in its apocalyptic and drastic quality, owes to expressionism but is far from the sober laconism of the post-war ›Kahlschlagliteratur‹.«
Mitteldeutsches Jahrbuch für Kultur und Geschichte

»An epic work of documentary fiction which searingly dramatised not the desperate aftermath of the war but the brutal last days of the Third Reich.«
Malcolm Forbes, The Herald