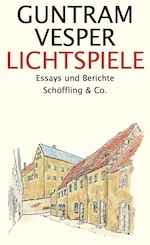 Following Guntram Vesper’s mammoth prose work Frohburg, Schöffling & Co. published his prose in North of Love and South of Hate and his poems in Lowland Bay. His collected essays, under the title Lighting Effects: Essays and Reports, now complete the oeuvre produced by this major writer. The collection’s core is the selection Lighting Experiments Dark Room, published in 1992, in which Vesper takes stock of his previous essays. This selection has now been supplemented with essays published after 1992, especially those from his exciting late work, extricated from Frohburg.
The volume, edited by Thomas Schaefer, includes an afterword by Andreas Platthaus and collects texts on writing, (hi)stories, places, portraits, and books and reveals the alert, curious intellect of Guntram Vesper, who died in 2020.