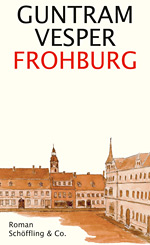 FROHBURG is, without doubt, Guntram Vesper's magnum opus, as well as where everything began for the author: Frohburg was the place of his birth in 1941, the place he grew up and the place his family fled from in 1957, the land around it providing the backdrop to a historical chronicle of a German era. Here a country and an age are comprehensively captured – culture and politics, war and post-war – it is an all-embracing and wonderful portrait of German life in the twentieth century, a powerful work of prose that stands up to comparison with books by such greats as Peter Kurzeck, Walter Kempowski and Uwe Johnson. FROHBURG is a cornucopia of stories, most of them based on the author's own experience, a grand autobiographical narrative, a book about the whole world on a manageable scale, a historical and chronological panorama the likes of which we haven't seen in a long time.

Guntram Vesper is a masterful author, and his FROHBURG is a captivating series of stories that grip the reader and refuse to let go.

»In a Europe with the audacity to wonder about staying together, a book like this is more important than ever: a narrative that reminds us of the pieces of history, personal and national, that knit us together and can't quite be thrown away.«
New Books in German

»A museum, an archive, a life's work: Vespers's strong perceptional gaze turns his attention to a manifold variety. With great sensitivity for East-West-phenomena this opulent novel stimulates things and events that threaten to sink into oblivion.«
Prize of the Leipzig Book Fair, The Jury

»The novel's complex architecture is held together by a highly sovereign narrator who observes maniacally, knows stunning things and sets up a monument for his childhood's landscape he had left in 1957.«
Prize of the Leipzig Book Fair, Sandra Kegel

»Guntram Vesper's novel FROHBURG belongs to those books that make you speak in superlatives: Opus magnum, mammoth work – and it does so deservedly.«
Prize of the Leipzig Book Fair, Laudatio by Dirk Knipphals

»Even though FROHBURG narrates history, it is a highly current novel whose poetological principle urges to be transferred to the present. An almost incommensurable novel, a life's work.«
ZEIT ONLINE

»The author, a clear favourite for the Leipzig Book Fair Prize as his autobiographic mammoth work narrates particles of reality of a whole century in the tradition of a Balzac, was already labeled as the ›Saxon Proust‹.«
DIE WELT

»Guntram Vesper's FROHBURG stands every comparison. Only long published big novels with epoch-making demand such as Uwe Johnson's 'Jahrestage' come into question as benchmarks. FROHBURG is a signum for rootlessness and a vanishing point for literature. While the sensual, blazing narration is paid its tribute and a substantial realism balances out finely chiselled mental patterns, the main character in this novel unmistakenly is literature itself.«
Süddeutsche Zeitung

»Guntram Vesper's work is without doubt an eminently consequent and incorruptible example for the attempt to finally reach the steadfast by telling, collecting, repeating, varying and complementing a reservoir. Vesper's motivation to write seems to be the creation of a roughly solid fundament for his existence, the construction of a transcendental shelter.«
DIE ZEIT

»Vesper is a master in overcoming distances. The almost incredible amount of material – autobiography, oral history, local history and archive research – is not hidden, but spread out in details quite effectively. A chronicle of Saxony in the 20th century. Virtuosity of narrative combination.«
Die literarische Welt

»A thousand pages and not one bit too long. (...) No doubt FROHBURG is today's most weighty book - in every aspect.«
Frankfurter Allgemeine Zeitung

»Not simply a book, a colossus of 1.000 pages, an exuberant panorama of history, also the story of a family, a narration branching towards infinity, with countless figures who appear and leave again. A maelstrom that won't let you go. FROHBURG brings a sunken chapter of German contemporary history back to the surface.«
Frankfurter Rundschau

»As model for his very personal search of lost time, Vesper names Marcel Proust. (...) The focus of this polyphonic, wide-ranging panorama is on the years between World War II, the invasion of the Red Army and everyday life in the GDR. (...) Like his ancestors, who were miners, Guntram Vesper descends into the tunnels of world and family history to bring to light the raw material of experience.«
Süddeutsche Zeitung

»FROHBURG - no doubt - you've got to read: A novel, or rather a chronicle, a museum, a collection of German destinies in the 20th century, deservedly nominated for the Prize of the Leipzig Book Fair. Through means of literature FROHBURG measures a whole life, maps a whole country. Guntram Vesper calls FROHBURG ›a novel of my mind‹. (...) Guntram Vesper delights the critics with a gem beyond compare: With FROHBURG, this opus of 1,000 pages. A text unlike any other.«
ZDF aspekte

»Coming to an end after having read one thousand pages, ten thousands of stories, met countless people, one is more than willing to recommend to read this. A literary life journey. A big book.«
Freie Presse

»It's Vesper's lifework. The change between lyrical, poetic and prosaic, Proust-like passages is fascinating.«
3satbuchzeit extra

»FROHBURG brings together everything that Vesper has published so far. (...) A daring book because it claims to master an abundance of people, incidents, objects and performances. In doing so, it is written excitingly, even cheerfully (...). Guntram Vesper has arranged a celebration for oral narration (...)«
Die Presse

»A panorama of the German history from Empire to 1957. Guntram Vesper's FROHBURG is an intense memoir novel. Anecdotes of linguistically crystal clear erratic beauty – masterly and powerful. (...) FROHBURG stands out in his monumentality, globality and obsession as well as in his formal ambition. It might well become itself a book for history lessons.«
Der Tagesspiegel

»An opulent, labyrinthine and eventually very well-arranged novel. (...) FROHBURG is a tremendously rich novel that casts a spell over his readers.«
Wiener Zeitung

»Autobiographic family strands always merge into social strands. It's spectacular how Vesper manages to interconnect the self and society in such a concrete form.«
Südwestrundfunk (SWR)

»A life's work, the artfully built quarry of a biography, in fact not a novel, but vast literature. (...) An opus magnum reminiscent of Uwe Johnson and Peter Kurzeck with its addiction to memory.«
Hamburger Abendblatt

»This novel operates like our memory, we tell a story, wander off, discover other contexts, draw new parallels, get tangled up, take mental detours, and eventually return to the point of departure. (...) It's an tremendous effort of exploration and unraveling. On endless and intricate paths, FROHBURG leads us towards the relentlessness of life in the 20th century. You need to engage in this prose, this idiosyncratic stream of thoughts and memories. And soon you will find yourself captivated.«
Bayern 2 Diwan

»A monumental novel about Germany.«
dpa

»To call Vesper's novel a chronicle is to underestimate the author's narrative power as well as the modernity with which he combines narrative traditions (Boccaccio's Decamerone, Hebel's Schatzkästlein) with a finely dosed resonance of the 21st century.«
der Freitag

»A book of life, carrying us through decades. (...) Vesper's opus magnum is almost museum-like in character, like a collage it is composed of memos, memories and diary entries.«
taz

»This author captivates by language what is about to disappear. (...) His downright manically precise language has a seductive power.«
Dresdner Neueste Nachrichten

»A clever, rampant wickerwork, uncontrollable. Seldom has the German milieu in the past decades been so colourful depicted.«
Deutschlandfunk

»A piece of German history, expressed in stories turned into literature: Due to its many levels of reflection, the book in parts resembles Robert Musil's great success Der Mann ohne Eigenschaften. The permanent epical firestorm that the artist raises with his kaleidoscopic stories is inspiring. Especially his meticulous exploration of the GDR milieu is impressing.«
mdr figaro

»FROHBURG is an astonishing, impressive and rich book. Deservedly Guntram Vesper has been awarded the Prize of the Leipzig Book Fair 2016.«
Goethe Institut

»In FROHBURG, one carefully investigated narration follows after the other.«
Deutsche Welle

»Again and again, Vesper creates elements of surprise. It is a particular time travel into German history.«
Neue Presse

»A collection of fragments of an autobiography and separately viable novellas. This sovereign narrator captures it all.«
Neue Osnabrücker Zeitung

»The text proliferates in an organic way, in an onion structure, remininiscent of oriental storytellers.«
Badische Zeitung

»Every page shows how much effort and meticulousness Vesper put in his book.«
Tiroler Zeitung

»FROHBURG is a cornucopia of history, a world book from the provinces.«
Hannoversche Allgemeine Zeitung

»A 1,000-page book, as thick as a life. Some call it unreadable, some incredible. And others say both.«
Leipziger Volkszeitung

»For over 1,008 pages the author meanders through the memories of a life that is his own and at the same time the one of so many others, so that the microcosm of an individual turns into the enormous panorama of pan-German life in the 20th century. (...) The fact that the exuberant abundance of material – collected, labeled and assembled by a manic observer – doesn't overstrain readers, is because of Vesper's verbal art that guides them even through the longest sentences.«
Berliner Zeitung

»An exuberant novel about German life, originating from the small Saxon town Frohburg, Vesper's birthplace. A book of memories that – due to its anecdotic structure and its associative wandering – challenges readers.«
Die Rheinpfalz

»Vesper continues and masters the principle of detailed, meandering, discursive, detouring and associative narration in his award-winning book of memories. A book like a river that carries you away and won't let you go.«
Gießener Allgemeine

»FROHBURG is a lively told book, overflowing with the joy of storytelling, almost impossible to put down.«
literaturkritik.de

»FROHBURG is a powerful work of prose that needs to be put next to the great books of Peter Kurzeck, Walter Kempowski and Uwe Johnson.«
Südkurier