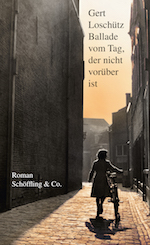 Gert Loschütz
Ballad of the Day Not Done

For Karsten Leiser, it isn’t summer if it doesn’t smell of chamomile, poplars aren’t poplars if they aren’t lining a channel, and streets are not really streets if they aren’t chaussées. During a sleepless night, he tells his girlfriend Vera why: because his landscape is always the landscape of the childhood he had to leave behind one morning. “Look carefully at everything because you won’t see it again”, his mother told the little boy on the eve of their flight from the German Democratic Republic. Karsten commits everything to memory, which he now revisits on every anniversary of their flight. It doesn’t matter how far he travels as a travel writer or how many hotels he stays at to undo that first, decisive night in a hotel; the past always returns, like the leather suitcase from long ago that he simply can’t get rid of.
In his spare and artful novel Ballad of the Day Not Done, Gert Loschütz, German literature’s great contemporary excavator of the past, unflinchingly reveals the rage and despair of a man robbed of his center.

»Gert Loschütz is a master of precise description. With his sentences, he brings landscapes to life in which present and past times intertwine.«
literaturkritik.de