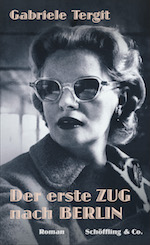 In her fast-paced satire The First Train to Berlin – published for the first time in its original typeface – Gabriele Tergit leads us through post-War Berlin. The young American Maud is naive and has not seen much of the world outside of New York’s high society. When she gets the opportunity to accompany a British-American military mission to Berlin – with the aim of teaching the Germans the principles of democracy – she takes this chance to go on this one adventure before her wedding. The chaotic group includes a lot of quirky characters, such as a fake lord, with differing and contentious political views. Soon the glamorous but naive Maud realizes that the Germans are neither interested in democracy nor in being saved by her or the other Allies.
With her signature black humor, this great exiled writer reveals a post-War Germany that has yet to overcome its National Socialist mindset. An angry novel replete with absurd dialogue and situational comedy to rival Billy Wilder’s screwball comedies.
Like Tergit’s successful Effingers, The First Train to Berlin has now been newly edited by Nicole Henneberg, who also provides historical, biographical, and literary context for the plot in an afterword.

»Seeing through the eyes of an eager and naive American allows her to touch upon every conceivable topic of the day, nationalism all over Europe, German obedience and obduracy, Russian power plays, English bigotry, and American simple-mindedness.«
Erhard Schütz / Die Welt

»A typical Tergit story that in some respects recalls her novel Käsebeir Conquers the Kurfürstendamm published in 1931.«
Nicole Henneberg