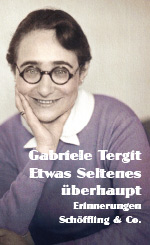 >>The autobiography of a critical Jewish journalist and writer

Gabriele Tergit (1894-1982), the Jewish intellectual, journalist and writer, is certainly among the most remarkable and courageous women of the twentieth century. As the first female court reporter in the 1920s, she was particularly interested in the human stories and motivations behind the actions of the accused. For her, court cases were a mirror of society, and even in apparently insignificant cases she recognised the major problems and issues of her epoch. Her novel Käsebier Takes Berlin (1931), a contemporary diagnosis of the late Weimar Republic, made her famous as a novelist.

An observant social critic with a sharp eye, Gabriele Tergit didn’t shy away from discussing Nazism in her reporting. After barely evading arrest by the SA in 1933, she fled Germany for Palestine and subsequently lived in London as an exile.

Her extraordinary autobiography SOMETHING ALTOGETHER RARE first appeared in 1983, one year after her death, in a heavily altered edition. It is now available for the first time in a carefully edited new edition.

»Interwoven with political analysis, blended with memories of her encounters with 'book people' like Peter Suhrkamp and personal correspondences. (...) It's also an irreconcilable summary of her time.«
Susanne Mayer, Die ZEIT

»In her sometimes witty and torn language, Tergit’s memories read like a mosaic of troubled times. (...) An encounter with the riddles of the twentieth century shaped by totalitarian violence.«
Till Greite, Frankfurter Allgemeine Zeitung

»Tergit is more of a reporter and observer of her time than an autobiographer. She prefers to write about friends and colleagues rather than about herself, creating impressive images.«
Nadine Lange, Tagesspiegel

»As a smart and socially critical observer, she realized early the increasing destabilization of political conditions.«
Nicole Hoffmann, Missy Magazine

»The lively and interesting memoir of a remarkable woman and her not-so-ordinary life.«
Sabine Roeske, ekz