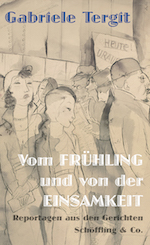 Gabriele Tergit
Of Spring and Loneliness