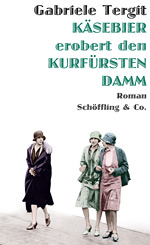 In six frenzied weeks, Gabriele Tergit wrote her first novel, which made her instantly famous upon its publication in 1931. KÄSEBIER TAKES BERLIN is the story of the rise and fall of Käsebier, an entertainer discovered by a newspaper reporter at a cheap variety show. Trying to make a splash among his colleagues, he turns him into a megastar. Estate agents and speculators latch onto his sudden fame, the bored ladies of polite society make pilgrimages to his shows, and Käsebier himself is relentlessly promoted.

Gabriele Tergit, a prominent female reporter of the 1920s, is both an implacably careful and sympathetic observer. The charm of her novel lies in its trenchant and highly comical dialogues as well as its precise descriptions of contemporary society – from dancing girls to master carpenters to media moguls. Her own workplace – the editorial offices of the Berliner Tageblatt's cultural section – comes under particular scrutiny. Even in those days, Berlin, deep in eastern Germany, was an ideal yet difficult city for creative people.

»This novel seems fresh, bold and light-hearted in a Berlin kind of way. It draws from Tergit's experiences as a reporter, her observant look on details. The image of an urban society on the slide.«
Süddeutsche Zeitung

»A fast-paced urban novel about the newspaper business. (...) Although more than 80 years have passed since first publication, this novel almost reads as if it had been written today. (...) More than anything it is a novel about Berlin, about the pace of urban life and the cynicism that goes with it, about rising and falling - and about the joy to watch, to gossip and make money with it, too.«
DER SPIEGEL

»In KÄSEBIER TAKES BERLIN, set during the late Weimar period, there is more gender diversity than in Erich Kästner's Fabian and less environmental fug than in Fallada's Kleiner Mann, was nun. (...) And this is precisely why Tergit's novel, which contemporaries read primarily as a key novel, serves also as a brilliant diagnosis of its time.«
Welt am Sonntag

»You should read Gabriele Tergits novel, first published in 1931. (…) Not without reason it is regarded as one of the most important books of the Weimar Republic.«
DIE ZEIT

»A mesmerizing book. (...) This fast-paced novel is on par with books by Hans Fallada and Erich Kästner.«
NZZ am Sonntag

»Gabriele Tergit, journalist in Berlin, described the same sensationalism, fast pace and crisis we know today. Marvelous that this big-city-novel from 1931 is now being republished! (...) The novel mocks Berlin’s society without mercy. (...) Tergit draws a portrait of Berlin that could have been written today.«
rbb

»As bold as only the Weimar Republic could be – this big-city-novel needs to be finally rediscovered. (…) More actuality, more relevance to the present can hardly be demanded of a novel. (…) Tergit's dialogues are unmasking and pointed – they rank among the strengths of her novel as well as the constantly sparkling, fast-paced language.«
Westdeutscher Rundfunk (WDR 3)

»No German-speaking journalist of the 1920s was a more meticulous observer or striking writer ... a female Alfred Polgar – but more passionate.«
FOCUS

»A novel far more multi-faceted, perceptive and turbulent than Keun, Kästner or Fallada, who are always being lauded as mirrors of the Weimar years.«
Die Literarische Welt

»A furious social farce that, 85 years after its first publication, appears more current than ever. (...) One of the reasons for the timeless charm of Tergit's KÄSEBIER TAKES BERLIN may be the presence of several remarkably self-confident, emancipated and quick-witted women.«
Deutschlandfunk

»Impetuously, crashing, capriciously – this is how the dialogues speed through the pages and give us wonderfully pointed insights into the various milieus and the media world of the Weimar Republic. (...) dashing and snappy.«
Börsenblatt

»In a lucid, fast paced and timeless manner, Gabriele Tergit describes the trafficking and sensationalism of Berlin’s society during the late Weimar Republic. Her debut is on par with Fallada's Kleiner Mann – was nun? and Kästner's Fabian.«
Tagesspiegel

»KÄSEBIER TAKES BERLIN is a dazzling picture of an era that has lost nothing of it’s gripping power.«
Deutschlandfunk

»While its story is specific to that epoch and that location, KÄSEBIER TAKES BERLIN explores a universal theme, one that is more urgent now than ever: the role of a free, and threatened, press in a fragile democratic society.«
Heidi Mastrogiovanni, The New York Journal of Books

»In the end, the most disturbing parallels, as well as the most intriguing takeaways, have to do with the press. (...) What KÄSEBIER TAKES BERLIN makes clear is that, despite these differences, we’ve ended up in a similar situation to that of Germany in the 1920s: we have newspapers that aim to please the crowd at all costs. Tergit’s novel offers a valuable warning. This won’t turn out well.«
Ben Sandman, The Los Angeles Review of Books

»Portraying a society declining into fascism, the novel resounds with hollow laughter and is crisp throughout, but the journalistic sections feel most alive. These tableaus, which blend absurdism and poignancy, match the comic invention of classics like Michael Frayn’s Towards the End of the Morning and Evelyn Waugh’s Scoop.«
Publishers Weekly

»A star is born, Weimar-style, in this German novel originally published in 1931....Tergit's novel deserves a place alongside Döblin's Berlin Alexanderplatz, Canetti's Auto-da-Fé, and other key works of the period.«
Kirkus Review