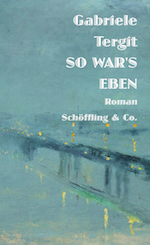 Gabriele Tergit
That’s How it Was

Following Effingers, Gabriele Tergit’s greatest wish was to write another great novel.
So war’s eben, a novel from the author’s estate now being published for the first time, follows the quotidian lives of affluent and not-so-affluent families from 1898 to the 1960s.
As the families’ fortunes take their course, World War I rages and the turmoil and right-left tensions of the Weimar Republic fill the editorial pages—Gabriele Tergit’s world during her tenure as a journalist.
On 30 January 1933, a family celebration that includes nearly all of the novel’s characters forms the preamble to their emigration—first to Prague and Paris, then London and the USA. Tergit illuminates the ever-greater problems facing both the emigrants and the Jews left behind—the suicides, the deportations, and the ruin of a Mischehe or forbidden mixed marriage.
Gabriele Tergit wanted to “depict her generation, with all of its hopes, disappointments, and disruptions; our entire senseless world starting in 1932.” She wanted to capture the generations of the displaced, including the Jewish refugees in New York whom Grete, Tergit’s alter ego, visits in the early 1950s.

»Tergit writes with a light touch, musically, with a great ear for the way people speak and a fine, deeply humane wit.«
Juliane Liebert, Die Zeit