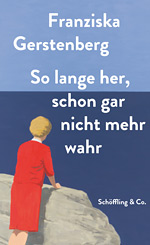 Sometimes in Franziska Gerstenberg's stories, something breaks in and changes her characters' carefully ordered lives forever. Sometimes they never even get to the point of building the family life they long for, because reality gets in the way of the dream of a home, a child and real love.

Mick has always tended to chuck things in, but when it comes to Inga it's different: she makes him want to persevere, even putting up with an awful job. If only he didn't get so uncontrollably angry ... Marga gets letters from a female stalker, who claims to have a child by her husband. And Sonja's fear of driving and separation anxiety disappear when, to her surprise, she lets slip a marriage proposal at a car dealership.

Rejecting the everyday grind, having a relationship and accepting family or being alone: in her new, masterful stories, Franziska Gerstenberg examines the fragile bonds between us from every possible angle.

»Sometimes a story will leave you embarrassed, sometimes churned up, and sometimes hopeless or even malicious. Despite their cool radiance, the texts reverberate so intensely that one can hardly read two stories in a row. (…) An exciting fictional adventure.«
Südwestrundfunk (SWR2)

»The author knows how to surprise her readers. (…) Her sense of when to stop is unerring: the timing of an superior storyteller. (…) Her tone is mild, wise, unpretentious and non-judgemental.«
Frankfurter Rundschau

»Franziska Gerstenberg’s stories leave a lot to our imagination, and this is how it should be.«
NZZ am Sonntag

»Franziska Gerstenberg is able to narrate her material powerfully and without much pirouetting. (...) The deeper she writes towards the unknown of her figures, the better are her stories.«
Sächsische Zeitung

»Franziska Gerstenberg writes masterfully – she tells her stories without any cinders, embellishments or burden, concentrated on the narrative core. Pathos and mendacious decoration are alien to them. (...) This simple and illustrious quality makes these new stories so warm and lively.«
Frankfurter Neue Presse

»A wonderful book (...) Gerstenberg's language is clear yet sensual, simple yet poetic. (...) Great literature in the small form!«
Am Erker

»In her new masterful stories, Franziska Gerstenberg describes the in all respects precarious circumstances of our world.«
Der Neue Tag

»The collection contains eight stories, they all are about the struggles of everyday life and show an impressive depth.«
Börsenblatt

»These stories are marvellous, above all they are splendidly narrated in a clear, unpretentious language. They are infused by a special, almost suggestive tone, they are balanced cunningly and head precisely towards an often surprising end.«
Kölner Stadt-Anzeiger