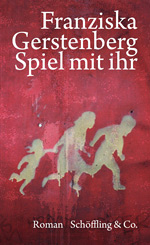 Franziska Gerstenberg
Play with Her

>> The long-awaited first novel from the award-winning story-teller

After his divorce, Reinhard, a fifty year-old lawyer, discovers two things: his body and the Internet. He looks for new female company on dating sites and turns the fantasies of others into his own. In Kristine he finds the partner with whom he can realise them. It all begins with harmless role-play. Kristine lets herself be seduced, yet at the same time she yearns for a father for her daughter and for an altogether old-fashioned family life. For a time it seems as if all wishes can be fulfilled. But what begins harmlessly enough ends in a disaster.

SPIEL MIT IHR is an intelligent, sensual and dangerous contemporary novel about the price that has to be paid for the fulfilment of all longings at once. Franziska Gerstenberg keeps a respectful distance from her characters, yet the abyss is always only a thought, a click away. »Nothing has happened,« says Reinhard at one point. But everything could.

»SPIEL MIT IHR is most remarkable on many levels, it's a thrilling and contemporary novel.«
DIE WELT online

»Gerstenberg is a cool observer of human miniature drama. In her debut novel she narrates a world in which all wishes can be met - and somewhere far away, love lurks as a threat.«
KulturSPIEGEL

»Franziska Gerstenberg achieved a huge success with her debut novel. (...) Her style is concise and clear, her observation remarkable. (…) The speech rhythm is accurate, the dialogues suit perfectly, there is nothing stiff or artificial. (...) Her novel is a gripping study about the distress of a society in which dreams have to be realised instantly.«
Neue Zürcher Zeitung am Sonntag

»Gerstenberg contrasts this miserable world with its trivial games and sad creatures with the aesthetics of her perfectly composed novel proving once again her narrative and stylistic talent.«
Frankfurter Allgemeine Zeitung

»When life gets in the way of the virtual world: In her debut novel SPIEL MIT IHR Franziska Gerstenberg deals with the basic psychological conflict of the presence connecting virtual and real life, sexual fantasies and their fulfilment. Virtually created desire fails due to the circumstance: people not only have a virtual, but also a real life.«
die tageszeitung

»Confidently Franziska Gerstenberg narrates this simple yet complicated story from a cold distance. She doesn’t solicit sympathy for her protagonists - at no time the reader feels the need to see Reinhard and Kristine as a happy couple.«
Nürnberger Zeitung

»This novel makes us shiver and smile. In perfect balance between the discreet and the highly visible Gerstenberg reflects integral incidents and plays off against us the question of superiority which is being brought up again and again. Willingly and sometimes breathlessly we let this be done to us.«
Frankfurter Rundschau

»In a cool and sovereign way Franziska Gerstenberg narrates about the burdens of lust. (...) With linguistically lean means, in the style of the ›New Objectivity‹, she has written a fascinating contemporary novel.«
Die Literarische WELT

»It is an erotically bold game, but Gerstenberg masters it almost perfectly.«
Südkurier

»The topic of her book is absolutely up-to-date.«
Weltexpresso

»Nowhere does Gerstenberg commit the mistake of confusing the conventional with the normal. So she can deal with delicate topics like sado-masochist or child abuse in a very sensitive way. All protagonists are fascinatingly authentic, gently introduced and without explicit moral judgement – at the most sympathy for all characters.«
news.de

»Her unspectacular intonation moves the increasingly outrageous incidents close to the normal, the banal, the daily. Thoroughly she expands the characters and allegedly leaves it to the reader to get an idea of the situation. Cleverly Gerstenberg does without sensational bangs and catastrophes.«
Sächsische Zeitung

»SPIEL MIT IHR shows a dangerous jugglery with characters and identities in a cool and crystal clear language.«
Sächsische Zeitung

»It is the skill of Franziska Gerstenberg to describe scenes so well that you dive into them and are swept along by them over and over again.«
Neues Deutschland

»Artful (...) and with a carefully arranged view on the characters. Franziska Gerstenberg’s SPIEL MIT IHR quickly goes under your skin. (...) The way Gerstenberg narrates her story, carefully and without exposing her characters, is exceptional.«
Neue Presse Hannover

»After two highly praised collections of stories Franziska Gerstenberg courageously comes to business in her debut novel. (...) The way things spin out of control is consequent, fast-paced and very coherent.«
Leipziger Volkszeitung

»SPIEL MIT IHR is an exposing and melancholic book about love, the relationships of our times and the playing with roles. Nobody else dares writing about love and its failure in such a disillusioning way as Gerstenberg does.«
HamLit

»Free from any voyeurism the author narrates both precisely and sensually about the high cost which has to be paid for the seemingly easy realization of all wishes.«
DRS 2

»Franziska Gerstenberg's novel convinces with the clear and unconditional way, with which she realises the idea of playing, without disregarding the characters' depths and subplots. In the seemlingly remote she develops an immense closeness. With the character of the mentally retarded and unemployed neighbour Meisner, Gerstenberg creates a moving portrait of a socially marginal figure, who, in the worse case, is the scapegoat.«
Deutschlandradio Kultur

»Skilfully Franziska Gerstenberg balances her cool text on a fine line on which „not much actually happens“, but this makes it all the more transparent for the possible abysses. Developed from a story that gives nothing away, and written in a language that does not show off, SPIEL MIT IHR gives a deeply defined picture of the contemporary time: The ›human being‹ is at risk to put himself entirely on the line and gambles himself away in the gambling den of virtuality.«
Die Presse

»In SPIEL MIT IHR Franziska Gerstenberg creates a world in which dreams seem to be only one click away. An intelligent and oppressive portrayal of society, told in an impressively casual way.«
Berliner Zeitung

»Gerstenberg employs a simple and clear language, omits metaphors and excessive sentimentalism. Instead, in few sentences the mental digressions of her characters, she reveals the ambiguity of every day life, opens trap doors to possible abysms. (...) By and by the novel develops an almost nightmarish maelstrom. Further and further Gerstenberg expands into areas, in which game and seriousness become blurred.«
Weser-Kurier

»With a moving case study and literary narration Franziska Gerstenberg strikes a beautiful balance. Her strength is her language, her precision – both of which benefit her wonderful characters. And despite her rigorous look at them there's still enough room for wit and humour. (...) With SPIEL MIT IHR Franziska Gerstenberg has right away conquered the novel as literary form for itself.«
MDR online, der Figaro

»In an unfussy way Gerstenberg narrates about the abysms, which open up between the desire for adventure and the longing for security. (...) Franziska Gerstenberg questions the balance of power between the sexes in such a subtle way, that the absurd end of this game almost appears inevitable.«
Westdeutsche Allgemeine Zeitung

»The what is not happening is what makes SPIEL MIT IHR so interesting.«
Literatur- und Hörbuch-Magazin

»Franziska Gerstenberg plays with perception and prejudices in an erotically charged novel, exploring boundaries and advising against rash determination. The story is fresh and bold with its protagonists, who surprisingly appear in another light again and again. Who is playing with whom?«
Main-Echo

»A fulminant treatise on those promises of luck which offer the dirty realms of the internet.«
Der neue Tag

»With her latest novel, Gerstenberg cleverly realizes the dilemma of middle-aged people, who have already failed in classical relationship affairs and, who are now trying to define new boundaries, in which love and sex are standing in a more liberating context.«
Ekz.bibliotheksservice

»Franziska Gerstenberg plays with the set-ups of her protagonists, lets lies grow freely, confronts her readers with cracks and breaches in cheap everyday-crockery. A nicely composed novel: subplots don’t get out of hand, social criticism is subtle and single characters are impressive. Highly recommended.«
bn bibliotheksnachrichten

»Gerstenberg draws a realistic picture of relationships in the virtual age. Her precise language leads the reader through this tangle of (power) phantasies, desires, loneliness and the ideas of relationships in a world where loose bonds have been declared essential.«
Bücherschau Wien

»SPIEL MIT IHR offers the reader an exciting reading adventure, which is, above all, nerve-wracking. Superbly written.«
litblog.de