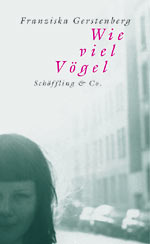 Franziska Gerstenberg
How Many Birds

read two stories from this title

» Read an extract at Words Without Borders

The Twin Towers are collapsing in New York - and on a holiday farm somewhere in the middle of Germany, this global catastrophe suddenly transforms a delicate and endangered love story into a silly episode. This happens ever so softly.

Franziska Gerstenberg sketches quiet and vivid portraits of people approaching, or in, their early twenties: a generation that has crossed over the threshold of the Wende almost imperceptibly, and that has been pervaded – and sometimes severed – by the ideas of life and a society in which people are working together, succeeding one in which they were working against each another.


»Gerstenberg writes with wonderful economy of action, using the poetry of her language and the sharpness of her observation to tell the tale. Her characters are vividly sketched young men and women, unremarkable and yet striking figures. Effortlessly switching between the first and the third person perspective, Gerstenberg brings out the quit drama of their lives. With this collection, Franziska Gerstenberg has made a spectacular entry onto the literary scene. At twenty-five years old, she is the leading light of the first generation of writers to be entirely hat home in the new reunified Germany, and her stories provide snapshots from contemporary German life. Writing in the best tradition of German narrative prose, this is one young author who promises great things for the future.«
New Books in German

»An excellent debut (...). Even on unfamiliar ground Franziska Gerstenberg succeeds with glowing images and glittering twists, witty symbols standing for the attitude towards life of a whole generation - and for a great talent.«
Neue Zürcher Zeitung

»Franziska Gerstenberg’s debut gives voice to the young German generation not willing to confine their identity to an ongoing debate about the differences between ›the East‹ and ›the West‹.«
Frankfurter Allgemeine Zeitung

»A masterful handling of various stylistic means, clear language – yet rich in detail – and a skillful orchestration of complex and broken characters reveal a great narrative talent. Many more outstanding litarary works to be expected.«
Jury statement, Lower Saxony's Award

»Hats off, what a talent, what a promise.«
Die Literarische Welt

»The new star in the literary heavens.«
die tageszeitung

»She is a master of little, perfidious changes of positions.«
Der Tagesspiegel

»The most subtle short stories. Queer characters are depicted with such quietness and restraint and make our imagination run at top speed.«
BRIGITTE

»Franziska Gerstenberg gave a brilliant debut that you ought to read.
Hessischer Rundfunk

»Gerstenberg masters in an accomplished way the laconic narrating in the tradition of Judith Hermann and Peter Stamm.«
Westdeutscher Rundfunk

»This author’s stories belong to the best of those of recent years. Everything about Franziska Gerstenberg’s stories is right, because she is a flawless storyteller.«
Südkurier

»She has found the proper atmosphere to authentically portray the breaches and antagonisms of her characters.«
tageszeitung Magazin

»Her stories have an elaborate but still completely unstrained ease. The sheer thought of what Franziska Gerstenberg will write in ten years time though is enough to make one dizzy.«
Frankfurter Neue Presse

»Gerstenberg's narratives have a presence, which is already inherent in the opening sentence.«
Norddeutscher Rundfunk

»Franziska Gerstenberg writes stunning first sentences and only afterwards do you realize those alone tell a whole story.«
Frankfurter Rundschau

»It doesn't occur very often that an author narrates in such a masterly way, so constricting and fraught with the banal tension in our lives. With a steady, earnest and at the same time easy hand she succeeds with a stunning debut.«
Berliner Literaturkritik

»Subtly breaches take place, certainties are blown up, for a short moment the unsecure protagonists reveal an unscrupelousness which is often peculiar to adolescence. Adeptly jotted down portraits of people who stand at a turning point in their lives.«
Journal Frankfurt

»Franziska Gerstenberg is a master of first sentences. An entire fate may become apparant in the space between two sentences; an entire path of life may disappear in an apodosis.«
Bayerischer Rundfunk

»Be sure to remember the name Franziska Gerstenberg.«
Hamburger Abendblatt

»Gerstenberg’s aplomb in applying her stylistic devices to create an intense atmosphere or a credible psychological portrait within a few lines is astounding.«
Saarbrücker Zeitung

»These stories have the power to surprise readers - and to make them happy.«
Stuttgarter Zeitung