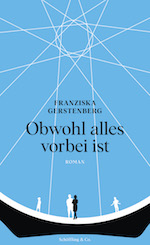 Franziska Gerstenberg
Although Everything is Over

Shortly before 11th September 2001, East German Charlotte and West German Simon meet. Soon after the birth of their child the first cracks in the relationship appear. And even though Karl is born shortly after Greta, the marriage can no longer be saved. The couple decides to quite literally divide both the house and the family; Charlotte lives with their son in one half, Simon with their daughter in the other. Growing up in this version of normalcy leaves its mark. Karl, a loner, begins to stalk his sister, and when Greta becomes politically active, he wants to show her what he’s capable of – with fatal consequences. Ultimately, not only the family has to ask itself how to go on when everything is over.
In her great family and social novel, Franziska Gerstenberg captures all of the seemingly trivial moments that ultimately end in catastrophe. With poetic flair, she creates a compelling portrait of the last 20 years in reunified Germany and searches for potential salvation in love.

»Although Everything is Over is both a thrilling love story and a tragic account of the oldest battlefield known as ‘family’ that nobody leaves unscathed.«
Inger-Maria Mahlke

»A novel of maturation the likes of which has never been seen before! […] Franziska Gerstenberg tells a virtuos and captivating story of a family in which dreams become such unrelenting nightmares, that only love can free them. There is so much world and contemporary history in this psychologically subtle and unsparing analysis, that the novel develops an ever-stronger pull from page to page […]. Although it's all over' - a book you can't forget.«
Lucy Fricke