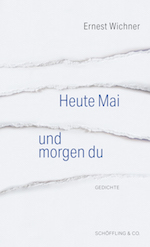 Ernest Wichner
May Today and You Tomorrow

>> Poems from almost four decades by an important cultural mediator

To write in the local jargon—what would this sound like? To tell legends in no and all languages at one and the same time? The lyrical “I,” a thief on a pebbly beach, has moved west—“in the meantime there were plumbs, dark blue one presumes, and two world wars”—for the past few days in stages or perhaps forever in a long-dead country. In May Today and You Tomorrow, poet and translator Ernest Wichner takes the measure of eras, landscapes, and friendships, including his with Gellu Naum and Oskar Pastior; Heinrich Heine even once left a message on his answering machine.
The selection from the volumes Stone Soup (1988), The Other Side of Gestures (2003), “like I'm unlocked” (2010), and Fresh Snow and Ovomaltine (2010) covers almost four decades and is rounded off by unpublished and new poems as well as an afterword by Maren Jäger.

»Ernest Wichner's texts decidedly seek a connection to the tradition of the aesthetic avant-gardes.« >> Sibylle Cramer