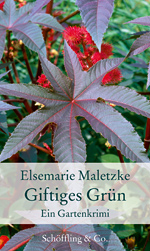 Lina’s uncle supposedly died as a poor man. But then it turns out that he has left her and two further inheritors with a task, and a small fortune to the one who can solve a case that threw the uncle’s life off the rails thirty years before. Three amateur detectives set about looking for the site of the alleged crime at Villa Buchfinkenschlag. When Lina finds the dilapidated house in an overgrown park, she meets the former gardener Johann, an attractive but opaque man with a predilection for beautiful, poisonous plants. It is he who must come to Lina’s help when she trustingly puts herself in danger.

In her garden thriller, Elsemarie Maletzke plays with the component parts of the classical »whodunnit«, with scatterbrained witnesses, false suspects, hasty conclusions and, of course, the question of whether the gardener is the murderer.

»Maletzke portrays in a sometimes capricious but more often than not malicious manner the hysteria of gardeners and the dogmatism characteristic for this species. Without blinking she observes upper class quirks, tanned calves and lifted cheeks.«
DIE ZEIT

»The author combines her plot with images of gardens that appear as characterful and unique as their gardeners. The various plant species with their different needs are as individual as the human characters. GIFTIGES GRÜN combines Maletzke’s expertise in gardening with her talent for thrilling and accurate narration.«
Südwestpresse

»The scene of the presumed murder: Buchfinkenschlag, a mansion surrounded by an overgrown park kept by gardener Johann, an attractive man and shady character who shows a strong interest in beautiful but poisonous plants. Elsemarie Maletzke proves herself an expert on gardening and plants. A thrilling novel for garden lovers.«
garten-literatur.de

»What dark-green mysteries are concealed behind the walls of Buchfinkenschlag? A thrilling garden novel, told with horticultural knack.«
Die Sofagärtnerin