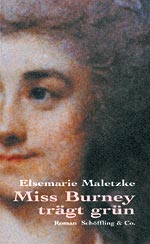 Miss Burney is a lady who wears green when every other lady wears pink. The independently-minded and inquisitive Miss Burney, who lived in London at the end of the 18th century, had her own opinions on the subjects of writing and loving – opinions at odds with convention. She burnt her manuscript to save it from prying eyes, and she stuck by her step-sister Sally when the latter embroiled herself in a scandalous rendezvous. Sally was banished to the most dragon-like of aunts and Fanny to sister Louise in the country. There she once again began to write: a novel, Virginia, about a young woman entering society. Her book became a bestseller and all London sought the acquaintance of Miss Burney. She met the intellectual greats of the time - Dr Johnson and Mr Boswell, Sir Joshua Reynolds, and his patron Mrs Montague who took her to Bath.

In Bath Miss Burney fell in love, a feeling she had come to believe she would never again experience. But the Comte d'Arblay, a charming but aimless young man, failed to take notice of the lady in green. Only when it was too late and Miss Burney had accepted an offer to become a dresser to Queen Charlotte at the English court, did he recognise how dear Miss Burney had become to him.

Too late! She went to Windsor and he to Paris where, with little enthusiasm, he became enmeshed in the French Revolution. Fanny meanwhile had a comfortable living but was driven to the verge of despair by the meaningless ceremony of court life.
Once again she began to write, and once again she had to burn her manuscript. Finally, as Madame d'Arblay, she accompanied the Comte to Paris, to the heart of the French Revolution.


In her debut novel Elsemarie Maletzke tells the story of Fanny Burney – a real-life character, albeit in reality somewhat different from the way the author imagines her – with sympathy and understanding, with wit and elegance, and she imbues her fictional characters – the amiable Mr Featherstone, for example, whose hope is that Miss Burney may write and be happy – with sparkling life.

»Elsemarie Maletzke has used her vast experience as a biographer – she is the author of biographies on the Brontës, George Eliot, and Jane Austen – to write a sprightly novel. A real treat for the reader, particularly for eighteenth-century fans.«
World Literature Today