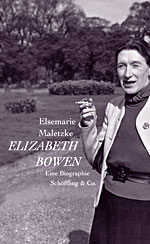 Born in Dublin in 1899, Elizabeth Bowen was the same age as the century she lived in, and its key events and turning points are reflected in her work. She is one of the great women writers of the English-speaking world. A real beauty, thin and angular yet perfectly shaped, charming yet tough as nails; a chain-smoker, a fan of strong martinis and fake jewellery, the lover of countless men who nonetheless remained true to her boring husband throughout their marriage. In ‘30s London she was a queen bee of the literary world. The path to her Regent’s Park salon occasionally coincided with the one that led to Bloomsbury.
Elizabeth Bowen published twenty seven books of novels and short stories, won numerous literary awards, and was twice awarded honorary doctorates.


»Not only does Elsemarie Maletzke report about history of literature but also is she a remarkable story-teller speaking in an unsolemn, amusing tone which suits her subject perfectly.«
Der Tagesspiegel (on JANE AUSTEN)

»A brilliantly researched biography. (...) Elsemarie Maletzke describes tea parties and jealousies, loving relationships and continuing anomisities, bringing to life not only Elizabeth Bowen the writer but also the bon vivant lifestyle of British artists and intellectuals in the Thirties. And most notably, this biography gives a striking account of their history and mentality.«
DeutschlandRadio

»Here is a fulminant biography, carefully tracing the ramified paths of her life with its cities and milestones, as well as the many men that she felt connected to – as well as her relation to her great friend Virginia Woolf, or to Carson McCullers.«
Sächsische Zeitung