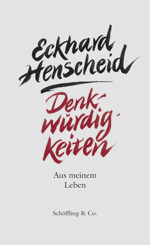 He is revered as a humorous stylist, feared as a universal critic, lauded as one of the most independent-minded German authors: Eckhard Henscheid, co-founder of the ›New Frankfurt School‹ and the satirical magazine Titanic. In his autobiography DENKWÜRDIGKEITEN, he talks about his dear friends – including Robert Gernhardt, F.W. Bernstein and F.K. Waechter – and his favorite enemies... With just as much passion as he holds for classic literature, music and opera, he scourges everything that strikes him as pompous and vain. Not surprisingly, Henscheid liked to argue heatedly with politicians, intellectuals and fellow writers.

The self-portrait of a great German author and the story of the Federal Republic of Germany as it has never been told before.

»The most imposing work of humorous literature in post-war Germany. Definitely a classic.«
Süddeutsche Zeitung

»He lifts his enemies up, just to bring them down on the next page.«
Frankfurter Allgemeine Zeitung

»Anyone who knows and cherishes Henscheid’s work will absorb this a autobiography in a flash.«
Fränkischer Sonntag

»Eckard Henscheid is an unreformable know-it-all. His judgement on platitudes and stereotypes is merciless yet irresistable.«
DIE ZEIT

»Eckhard Henscheid, well-known satarist, critic and author, has written a self-portrait trying to avoid the common mistakes autobiographers make – especially boredom. Skipping back and forth between different periods of his life, Henscheid entertains with literary and stilistical reflections.«
Deutschlandradio