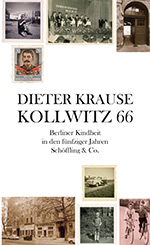 A Berlin Childhood in the Fifties
fiction, memoir

Dieter Krause grew up living on Kollwitzplatz in East Berlin. In the 1950s the courtyards behind the apartment blocks in Prenzlauer Berg belonged to children, who played marbles and cowboys and Indians there. Instead of ideological battles, conflicts were waged with stink bombs and water balloons. The boy travelled regularly back and forth between East and West, listening to Elvis songs in secret and bumping into Russian soldiers.

At the end of the fifties, his parents’ apartment brightened. They acquired colourful crockery, a TV, a motorbike with a sidecar and later even a Trabi. Political events took a back seat to personal exploits and the family’s progress, yet it remained ever-present in the popular hits and pop songs of the day. Then, in the middle of the summer holidays in 1961, came the news: they’re building a wall.

Dieter Krause vividly depicts the freedom of his childhood on the streets of Berlin while commenting sharply on the restrictions placed on it by the state, examining his upbringing in the early years of the GDR with microscopic precision.

KOLLWITZ 66 shows a childhood that was different from other people’s – lived among Nazi ruins and new-built blocks, the cult of Stalin and the American way of life, trips to the West and the building of the Wall, Young Pioneers and Donald Duck.

»Told with a wonderful lightness, unpretentious, but strong. (…) KOLLWITZ 66 is a quiet and delicate book – certainly one of the most enchanting of this season.«
Thomas Karlauf, Frankfurter Allgemeine Sonntagszeitung

»In the 1950s, the streets around Kollwitzplatz were an adventure playground for Dieter Krause. He remembers this time with great affection.«
BRIGITTE - 45 Best Holiday Books

»Dieter Krause tells the story of his post-war childhood in East Berlin, relishing each detail without overloading it with historical facts. (…) A tender book to bury oneself in.«
Christoph Dieckmann, DIE ZEIT

»History has a scent, a flavour, a sound. Only few have the power to resurrect this world of sensations, making it come alive even for later generations.«
Hans-Ulrich Jörges, Stern

»Do we need another GDR memoir? We do, actually.«
Leipziger Volkszeitung Bücherwelten

»The author (…) unfolds a dazzling panorama of Berlin in the 50s, connecting personal stories with the political schemes and back room deals made by the Eastern and Western authorities.«
Lothar Heinke, Der Tagesspiegel

»The author tells the story of his free, diverse childhood on the streets – and sharply comments on the governmental restrictions caused by the building of the Wall. In great detail, he tells about growing up in the early GDR. Very well done!«
Super Illu