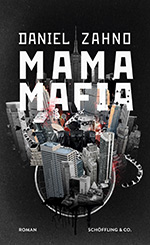 When struggling rock singer, bike messenger, survival artist and occasional thief Harvy nicks an iPhone at the Apple Store in New York’s Grand Central Station, he finds himself drawn unwittingly into a frantic whirlwind of events: he’s blackmailed, suddenly has a body to dispose of, and – to top it all – loses his heart to the girlfriend of the most senior mafia boss in New York: Tony Tangeroli. Tony, however, seems so enthusiastic about Harvy’s music that he wants to promote his band, the Raccoons. For Harvy, this is the beginning of a deadly high-wire act through the murky world of the mafia.

MAMA MAFIA is a wild ride through New York City, powerfully written and tense, with subtle hints of The Godfather and Pulp Fiction yet refreshingly new and full of surprises. Its breakneck plot and quirky cast of characters make this novel a sheer joy to read

»Zahno spoofs the genre of the mafia novel with an elegant sense of humor.«
Walter Vennen, Aachener Zeitung

»A novel like a fast bike ride through New York City. (...) Zahno peppers his finely balanced gangster comedy with numerous allusions and reminiscences to genre classics like ›Der Pate‹ and ›Pulp Fiction‹, superbly mastering a tightrope act between comedy and thriller, between romance and cliché. (...) Gripping popcorn literature without a dull moment.«
Kai Mühleck, Börsenblatt

»A fast-paced ghost train ride.(...) Between the fast-cut scenes and violent turns, a tender love blossoms between Harvy and his mafia bride.«
Verena Stössinger, Basellandschaftliche Zeitung

»Never boring, in the style of a good blockbuster – that's how Zahno tells his story.«
Theresa Hübner, Südwestrundfunk (SWR2)

»An exuberant New York novel, featuring crazy mafiosi, musicians with their head in the clouds and a few quite unpleasant bodies.«
Die Presse

»An bright mafia satire, as if Ariki Kaurismäki and Woody Allen had joined forces .«
Peter Henning, Schweiz am Wochenende

»A funky, suspense-packed, grotesquely funny gangster story; a dazzling, breathless ride through the streets of New York, without a break or resting point, but with a surprisingly open ending.«
Dagmar Härter, ekz Bibliotheksservice