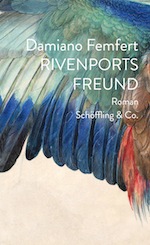 In his debut novel, Damiano Femfert explores issues of identity, guilt and forgiveness. Melancholy, tender and comic at the same time, he writes about friendship and the healing power of the unfamiliar.

Argentina, 1952. As though out of thin air, a young man appears in the small, sleepy town of S. He’s badly injured, has no possessions but the clothes on his back, and seems to have lost his memory. The man repeats only one name, over and over again: Kurt.

Doctor Rivenport, head of the local hospital, is far from pleased by the admission of this new patient. It disrupts his peaceful, perfectly balanced life, in which he conducts his duties as a doctor and pursues his passion: catching and preparing butterflies. Ideally, he’d like to be rid of Kurt, but it turns out not to be so easy. The police and local politicians’ investigations stall. The nuns who initially took Kurt in have turned him back out onto the streets. Rivenport has no choice but to open his own home to his former patient. Slowly, however, he becomes increasingly fascinated by Kurt, and begins to conduct his own investigation, ultimately leading him back into European history’s recent past.


»A perfect debut, as though written by an old master – timelessly beautiful and full of latent wit.«
Alina Bronsky

»A spectacular debut. (…) The most exciting novel of the season.«
Denis Scheck, druckfrisch (TV)

»Gripping like a crime thriller, Damiano Femfert tells the story of a foundling, reminiscent of Kaspar Hauser, and how an outsider hits the limits of social conventions.«
Terry Albrecht, Westdeutscher Rundfunk / WDR 5

»The way Dr. Rivenport frees himself from petrification and opens up his feelings is heart-warming.«
Die Presse am Sonntag