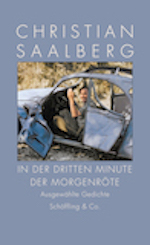 Christian Saalberg
In the Third Minute of Dawn

Christian Saalberg, previously considered an inside tip among poets, is in fact a writer of international standing: his poems are like filigree, full of life experience and outward-looking. His verses convey a poetic revolt against practicality and the obsession with efficiency; they are a plea for the childlike, the beauty of the marginal and the richness of the small. Saalberg’s work is influenced by surrealism yet goes beyond all traditions. Between 1963 and 2005 he published twenty-three volumes of poetry in total, opening up a new perspective on reality. For the first time, In the Third Minute of Dawn features a selection of his poetry, offering a cross-section of his work, which is far too little-known.

»It remains a mystery why this fine, consistent and consistently more focused poet never found the recognition that his work deserved during his lifetime.«
Michael Krüger

»Transforming snapshots into poetic pictures, Saalberg creates something new and exceptional, both exemplary and explanatory of his oeuvre.«
Marcus Neuert, FIXPOETRY

»The rediscovery of one of the great figures of contemporary poetry, distinctive in his imaginative power and melodic tone.«
Michael Braun, Signaturen Magazin

»One of the most brilliant German poets of the second half of the 20th century.«
Lebensart im Norden

»His poetry radiates a lifelong optimism, which he passes on to his audience.«
Kai U. Jürgens, Kieler Zeitung