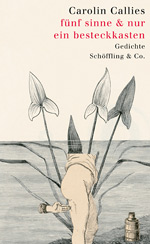 Carolin Callies tells strange stories in her poetry: about what it might look like to »ship microorganisms«; about »living in the crisper drawer«; about the »dangerous lives of songbirds in the eyes of others«; or about someone who makes »copies of bleating«. Above all she describes how grotesque it is to dwell »inside a flesh-coloured cloth«.

Art, said Gottfried Benn, owes much to the body. With a clarity and directness reminiscent of Benn, as well as blunt humour, Carolin Callies dissects the body until nothing of the surface remains. Her poetry approaches death with glue and plasters, trying to work out »if you die & never die«. It’s a good idea, then, to »keep cheerful in the wounds«.

»With her brilliant lyrical debut Carolin Callies, born in Mannheim in 1980, has developed a very sensual, burlesque ›poetry of the body‹ that is not afraid of flirting with obscenities.«
Neue Zürcher Zeitung

»The most important lyrical debut of this season. (...) Precise words, like a scalpel, sink slightly under the skin: Carolin Callies shows that the supposed incorporeality of language might in fact be better suited to describe the liquid, amorphous and procedural nature of the organic than superficial images could.«
Die Welt

»An astonishing debut, extremely courageous (...) ›The Song of Solomon‹ with another key signature.«
Insa Wilke, Deutschlandfunk

»The most important poetry debut of the year: With the cutlery box of language, Caroline Callies dares the rearrangement of our perception. Poems that literally go under your skin.«
Die Welt

»In any case the first chapter of this book brings to mind the very drastic, cold plasticity of young Gottfried Benn... As merciless as Ernst Jandl.«
Michael Braun, Deutschlandfunk

»Carolin Callies is interested in the linguistic construction of the body, she explores the sense and sensibility of our speech and pursues these motifs with a quality that is still rare in German poetry: with humor.«
Dennis Scheck, Büchermarkt

»It's great fun to read and interpret these poems. (...) HIghly recommended to all who are passionate about language.«
Südwestrundfunk (SWR2)

»Every poem exposes the beauty ideology of the human body as a sterile, inodorous, glossy product. (...) Callies shows that language, often seen as bodiless, might be even more capable than superficial images when it comes to describing the liquid and amorphous character as well as the transitional quality of organic matter.«
Tages-Anzeiger

»Nobody should believe these poems do not concern them, just because they think that poetry would be difficult to understand and they'd rather read exciting novels.«
Stuttgarter Zeitung

»Readers with a preference for wonderfully odd stories in verse form will enjoy every line of Carolin Callies’ poetry with a smile on their face.«
Mannheimer Morgen

»Callies’ poems rigorously do away with the concept of smooth, flawless and perfect bodies, with any form of self-tuning and the delusion of immortality.«
Der Freitag

»An irritating but also powerful book of disconcerting beauty that despite all coolness doesn’t go without irony and weird humour. Her poetry defies immediate comprehension but leaves a long-lasting impression.«
Kieler Nachrichten

»Callies’ poems are neither filled with melodramatic outbursts nor oozing inwardness. Instead they present prosaic, almost scientific examinations of our physicality, like field studies, full of wit and black humour, often burlesque and frivolous. Refreshing!«
www.fixpoetry.com

»Written in an excessive and cheeky language. With plenty of wit and experimentation.«
Signaturen

»Carolin Callies’ first book bears the wonderful title FIVE SENSES & A SINGLE CUTLERY BOX, and if it’s true that her cutlery is made up of her words, she perfectly knows how to handle it.«
Rheinische Post

»Poetry of captivating intimacy, formal refinement and enormous visual power. (...) In her debut, Carolin Callies sets out for an excursion into our physicality, and it is not only the lyrical vocabulary she extends by dealing with physicality but the body itself as she reshapes it by the means of language.«
Neue Zürcher Zeitung

»Praised as most important debut of the season by critics and experts.«
Badische Anzeigen Zeitung