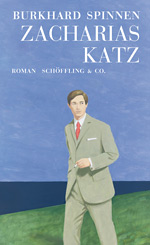 Summer, 1914. The young German-American Zacharias finds himself on board the President, a German ocean liner picking up passengers in the Caribbean. Zacharias is on the run, from what, he’s not sure. Maybe from gangsters in New York, maybe from his own past. Formerly a dispassionate journalist and Broadway librettist, Zacharias writes down the stories told to him by the other passengers aboard the President. They are tales of self-doubt and identity crises, scenes from a crumbling society that has lost faith in itself. When war breaks out in Europe, it reaches the President too. First it becomes a refugee ship, then an auxiliary cruiser with which the captain embarks on a mission to attack enemy vessels. Zacharias has to decide where he stands, and who he wants to be.

Burkhard Spinnen has written a parable about the fragility of our carefully constructed society. What happened in 1914, when the century was plunged into war, could happen again – and especially vulnerable are precisely those who would most like to keep themselves out of it.

»ZACHARIAS KATZ is a masterpiece. It connects people, nations and epochs with the returning insanity of a war that swallows everything and everyone. The image of a sinking mainsail becomes the iconic figure of the downfall of a whole era.«
Frankfurter Neue Presse

»With almost enthusiastic imaginativeness, Spinnen turns the most adventurous life stories into a splendid cabinet of curiosities.«
Berliner Zeitung

»The novel becomes very much alive, full of interesting characters and conflicts – Spinnen is a skilled narrator. Every new passenger brings with him a new story. Ranging from disappointment, self-delusion, failed hope to pain. ZACHARIAS KATZ shows how things can change from one day to the other – and the different reactions of people when friends become foes.«
Sächsische Zeitung

»In ZACHARIAS KATZ Burkhard Spinnen stages an ambiguous play of truth and fiction. But this novel told in episodes is also about suddenly losing grip in seemingly secure life conditions – which makes it even more up-to-date.«
Kieler Nachrichten

»With incredible sensitivity, Burkhard Spinnen tells the story of a lucky fellow, who stumbles through life allegedly without talent. An entertaining and precious work.«
www.sandammeer.at