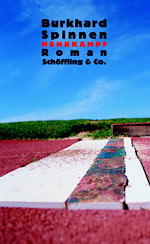 Burkhard Spinnen
The All Rounder

Los Angeles 1984. Roland Farwick comes unstuck on the long jump. This costs the world’s top decathlete the medal and his career. Twenty years later he’s shot and wounded – and restarts the life that had been on hold for so long. The investigating detective Ludger Grambach is one of millions who witnessed. His own past as a failed genius is closely linked to that of the decathlete.
A duel begins which is fought out on the periphery of the official police investigation and in the very depths of an internet game. Until everything that was put off twenty years ago finally has to be settled.

»Spinnen writes, as if he had taken classes with T.C. Boyle and then trumped his teacher.«
DIE ZEIT

»More than a simple crime story: MEHRKAMPF is an analysis of the forty-something generation, disclosing and denouncing their post-adolescent, indecisive attitude. All propeled forward by a subtle, funny, and cleverly composed crime story. (...) Respect! Refined. Radical. The entire concept, the setting, the plot are simply intoxicating.«
Ulrich Noller, Member of the Jury of Best Crime Novels

»Burkhard Spinnen has written a fiery novel about the anger of middle-aged men.«
Denis Scheck, Deutschlandradio

»A must-read! In Farwick and Grambach Spinnen portrays two intelligent players, drifting from virtuality into reality, where they haven’t the faintest idea what do do with themselves – let alone with others.«
Nürnberger Nachrichten

»Burkhard Spinnen portrays the life attitude of his own generation, who still felt the ripples of rebellion but were born too late to be swept away. (...) His economic contemplations of mediocrity and delusion make Spinnen’s novel an intellectual reading pleasure.«
Frankfurter Rundschau

»I recommend MEHRKAMPF by Burkhard Spinnen. At first glance, it is a crime story featuring as a spectacular opener the assassination of an ex-decathlon world champion. But more than that, it is an outstanding novel about failing, and coming to terms with it. Brilliantly written, multi-layered and captivating, MEHRKAMPF makes not only a great read but holds plenty to think about for men – and women – in the prime of their lives.«
literaturblatt

»An intelligent analysis of a generation of men who are shy of taking responsibility.«
SPIEGEL ONLINE

»MEHRKAMPF is a men’s book, a book on the dangers of stagnation, on the urge to change course that creeps over them in midlife.«
Die Furche